A line at the beach

The city, Sand-Ida and Trinity contemplate the future

His back to the bank of windows that fill the east-facing side of Trinity at City Beach, Justin Dick hardly looked like he was sitting on what might be the line between continuation of his popular restaurant on the waterfront or its potential relocation. 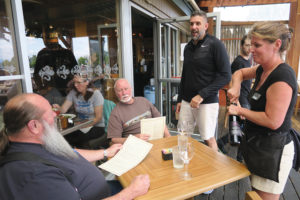 A couple of locals enjoy lunch and a chat with Trinity at City Beach owner Justin Dick.
Photo by Ben Olson.

Behind him, past the expanse of lawn that separates Trinity from the lakeshore, sailboats scudded across the waves of Lake Pend Oreille in an early-morning breeze. It was a typically idyllic summer scene and one that has driven diners to the establishment for years — certainly since Dick moved Trinity from its original location on First Avenue in 2009 to its current space at the beach.

“We knew this [location] was going to be challenging; it’s been a revolving door of owners since the place had opened, but I am pretty confident we are the longest-tenure leasee in this building,” he said. “I’m really proud of what we’ve accomplished down here in the past 10 years.”

Since Trinity moved to the beach a decade ago, Dick has grown the business to include 60 year round, full-time positions and another 75 seasonal workers. His restaurant — home to perhaps the most trafficked outdoor seating in town — could safely be classified as a Sandpoint institution.

Yet, sitting in the main dining room, Dick was very near the line that could determine whether Trinity stays or goes from its site inside the building that also houses the Best Western Edgewater Inn.

The motel-restaurant facility, owned by the local Cox family’s company Sand-Ida Services, is due to be torn down in September 2020 and rebuilt most likely under a different brand and expanded to 100 rooms — roughly double the current number.

That has been well known since 2017. Less clear has been what motel brand Sand-Ida will partner with for the rebuild and what that might mean for Trinity. The local rumor mill has run ahead of the complex realities of redevelopment at the high-profile site, but that’s because despite the narrowing timeline for tear-down, much remains up in the air.

“I don’t really have a lot to say at this point because we’re still working on making some of these decisions,” said Sand-Ida President Adrian Cox. “We’re very likely to change the brand to a Hilton or Marriott. It might even be a Best Western … [but] I think it’s not super likely.”

Though it may seem straightforward to tear down and rebuild a motel, there is a mass of working parts to navigate. Shot through the many nuances rolled into redevelopment at the site is the property line that runs in front of Trinity and Best Western.

According to city maps, while the Cox family owns the land on which the motel and Trinity are located, its property ends almost exactly on the other side of the glass from the restaurant’s dining room. Both the deck at Trinity and the pool at Best Western are on city-owned property, which includes the lawn to the east as part of the overall City Beach parcel.

Since around the 1970s, Cox said, Sand-Ida has leased the grassy area from the city, taking on care and maintenance. The company also owns the RV park, docks and 25 feet into Little Sand Creek located to the south and across Bridge Street from Trinity. As part of the long-standing agreement, Sand-Ida leases those docks and last 25 feet of its property to the city, which operates and collects moorage revenue there.

“The current lease is very much in the public interest; it works for everybody,” said Cox.

But in order to accommodate the amount of parking necessary for a larger motel on roughly the same footprint, Cox said Sand-Ida will need to expand its site by about 30 or 40 feet to the east. That would require somehow acquiring a strip of city-owned land that runs the length of Sand-Ida’s property from north to south, and extends east to encompass the portions of public property occupied by Trinity’s deck and the Best Western pool.

Cox suggested that Sand-Ida could propose trading the city some of the RV park land in exchange for the swath of ground on the east side of the current property line, or even transfer the entire RV park to the city in a combination land-cash deal that includes the eastward strip.

Should such an exchange come to pass, Cox said it would enable Sand-Ida to identify a suitable brand with which to partner and, because only some, like Hilton, allow franchisees to incorporate full-service eateries, that would determine whether or not Trinity can stay as an integrated part of the development.

“Definitely we would like to have a restaurant. Our first choice is to have it in the main facility just like it is right now and maybe on the top floor,” Cox said. “That’s our preference for sure: to have the restaurant and bigger than the one that’s there, and have Trinity in there.”

An alternative, he added, might be to shift Trinity across Bridge Street to occupy a portion of what is currently the RV park. But Cox was clear: “If we don’t get the swap from the city we have a hard time fitting the 100 rooms we’re thinking we want. … Everything is sort of holding up on, does the city want to trade us something?”

Dick is cautiously optimistic that some arrangement can be struck between the city and Sand-Ida that enables him to stay where he is. Still, he’s planning for the possibility that whatever brand the company chooses for the new motel won’t allow for an integrated restaurant.

“I’ve got a few buildings picked out in town; I’ve spoken to the owners and a lot of them are just waiting to hear from me on what we want to do next,” he said, adding that First and Second avenues are high on his list of prospective locations.

Meanwhile, getting to a win-win-win scenario at the current site looks complex from the city’s perspective.

As the process of gathering public input on the Parks and Recreation Master Plan ramps up, it opens the way for a multitude of potential changes that could affect how the city manages and develops City Beach over the next 20 years. What Sand-Ida does with its properties will almost certainly have a part to play in the overall vision.

From parking to amenities, “everything is on the table,” said Sandpoint Mayor Shelby Rognstad. “We’re just looking at everything as a whole. It’s perfect timing from my perspective that they’re looking at rebuilding this hotel, because it means that we can look at this thing from a holistic perspective.”

According to City Administrator Jennifer Stapleton, conversations between Sand-Ida and the city on the future of its beach area properties are in the very early stages, but City Hall is open to considering public-private partnerships to ensure what she called “a balance in terms of that private vision … and us protecting the public interest.”

First, Stapleton said, appraisals need to be undertaken to assess the value of the lawn, RV park and docks. Included in that, she said, would be an analysis of how much the strip to the east of Sand-Ida’s property — which she described as closer to 50 feet in width — would be worth on its own.

Best estimates are the appraisal could be four to six weeks out. No matter what, Stapleton said, “this is going to be a tough appraisal to do.”

Because of the complexity of the land uses and patchwork of ownership on and around the beach, there are numerous restrictions from a range of entities on what can be built where and how it can operate.

All of that will factor into how the properties in question are valued and what bearing that might have on any potential changes in ownership.

“It may not be in the public’s best interest to see more public land transferred to private ownership,” Stapleton said. “This isn’t one of those quick, easy decisions. There are a lot of nuances here and there’s going to be a lot of complicated conversations going forward.”

Cox said Sand-Ida is very interested in “actively trying to find ways that we can work together in mutually beneficial ways.”

For Dick, even the suggestion that Trinity might not figure into the future of the beach had the unexpected upshot of revealing how deep local feeling goes for his restaurant.

“Let’s not hit the panic button on all this, let’s try to find a solution,” he said. “Regardless of what happens down here we’re going to have a great opportunity of being successful with the support we’ve received … [P]eople will come to us wherever we go.”