Thought of a parasite can churn the strongest of stomachs. It’s a natural reaction to feel disgust at the thought of something creeping around inside of your body and feeding off you, reproducing inside of you and turning your colon into a fleshy metropolitan borough; Man-hattan, if you will. 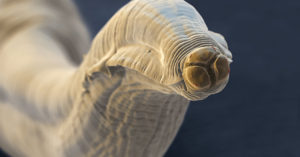 Typically, our biggest parasite-related fears come from tapeworms from undercooked pork growing in our intestines, or malaria spread to us by plasmodium parasites (carried by infected mosquitoes). Guinea worms are another nightmarish parasite that infects humans, entering people’s bodies as eggs in contaminated drinking water before grotesquely (and painfully) chewing their way out of their host to lay more eggs.

As miserable as our own parasitic woes are, when looking elsewhere in the animal kingdom, I would say we got pretty lucky. Larval heartworms can hitch a ride in a mosquito’s gut to infect new hosts and then proceed to live for up to seven years in our dogs’ hearts, which can lead to blockages and cardiac arrest.

The Toxocara parasite, better known as roundworm and scientifically referred to as a nematode, is a resilient nightmare transmitted by mothers’ milk and most often found in kittens and puppies. Toxocara can also be passed to humans and cause serious afflictions to children such as blindness and brain damage. The eggs can also remain active outside of a host for as long as 10 years. Be a responsible dog owner: pick up what your dog is laying down on a walk — it could save a life.

The practice of parasitism takes many forms, and because of that we had to develop different names for certain kinds of resource-sucking. Parasites will generally mooch off a host without killing it intentionally. The host is the parasite’s ecosystem, and though it might change the ecosystem to meet its needs, killing the host destroys its home; think about the worms and nematodes we discussed above.

Parasitoids practice similar methods as most parasites, but tend to take it a step further. Certain types of wasps will lay eggs in a host, which after gestation end up killing and using the host for sustenance. Parasitoids only need the host to reach a certain stage of growth, as opposed to requiring the host for their entire life cycle.

Jewel wasps are a parasitoid wasp native to Africa and the Pacific Islands. They’re beautiful insects, sporting a glossy iridescent sheen that conceals a sadistic nature. Jewel wasps will sneak up on cockroaches and temporarily paralyze their front legs with a toxin to keep them from crawling away. The wasp will then use a specially designed stinger to feel its way into the back of the roach’s head, rummage around in its brain and inject it with a cocktail of chemicals that has a similar effect to a frontal lobotomy in humans. It will then grab the roach by the antennae and lead it to a secluded nest to suffer for the next five to eight days as its young devour it alive from the inside out.

The Cordyceps fungi is another parasitoid. Everyone’s favorite spore-spewing bug killer has been observed infecting and killing insects (primarily ants) and then taking over their bodies to guide them back to their home colony to spread out of control.

Not all parasites are bad, at least not for humans. Wolbachia is a parasitic bacteria that exists in as much as 60% of insect populations around the world. It’s a devious bacteria that requires females to reproduce and will actually manipulate infected insect populations to produce more females than males. Wolbachia has a hidden effect that boosts the immune system of certain insects it infects, including mosquitoes, to minimize competition in its host.

You might be wondering: How does bolstering a mosquito’s immune system help humans?

It’s just not “Mad About Science” unless we dive into some prehistory. Parasites are nothing new; they’ve mooched off hosts for as long as there have been hosts to mooch upon. One of the oldest parasites we know of could be Trichomonas gallinae, which is a parasite that today commonly affects pigeons. Trichomonas can infect raptors like eagles and hawks that feed on pigeons, which can create painful sores in the mouth and esophagus of the raptors. Untreated lesions can become so severe that birds can’t eat and starve to death.

How does this fit into prehistory, you might ask?

One of our most famous and complete Tyrannosaurus rex fossils may show signs of Trichomonas lesions along its jaw. If this is evidence of a parasitic bacterial infection, that could prove this strain of parasite has existed for more than 67 million years, as well as showing a direct link between dinosaurs and modern birds.

If you’re looking for more parasitic fun in grotesque detail, check out the health section of the nonfiction collection at the Sandpoint and Clark Fork libraries (as well as the Bookmobile), starting in the 610s of the Dewey Decimal System. Need help finding it? They’ve got you covered at the info desk.