On the ‘wall’ that is really an inefficient fence

Having survived COVID-19 and feeling sort of — but not completely — immune, I recently traveled down Mexico way. I didn’t go into Mexico, except just a tiny bit, because: a.) I didn’t take my passport with me to Arizona, and b.) even if I had, I didn’t want to sit in traffic for an hour to get in and several hours to get back out. Instead, I stuck my left hand through “the Wall.”

It’s not really a wall, by the way, but a fence of 18- to 30-foot steel palings set in concrete and topped by vertical pieces of plate steel. It isn’t at all efficient. It has gaps in it. Big gaps, sometimes miles wide. And much of it simply replaces what had been in place for decades. The old border fence at Douglas, Ariz., was much more intimidating than the new chunks south of Bisbee. An able-bodied human desperate to get into the Estados Unidos de América might be able to scale the new fence. With a rope and grappling hook, no problem. Someone with a Sawzall and a generator might make a hole in it. And they have. 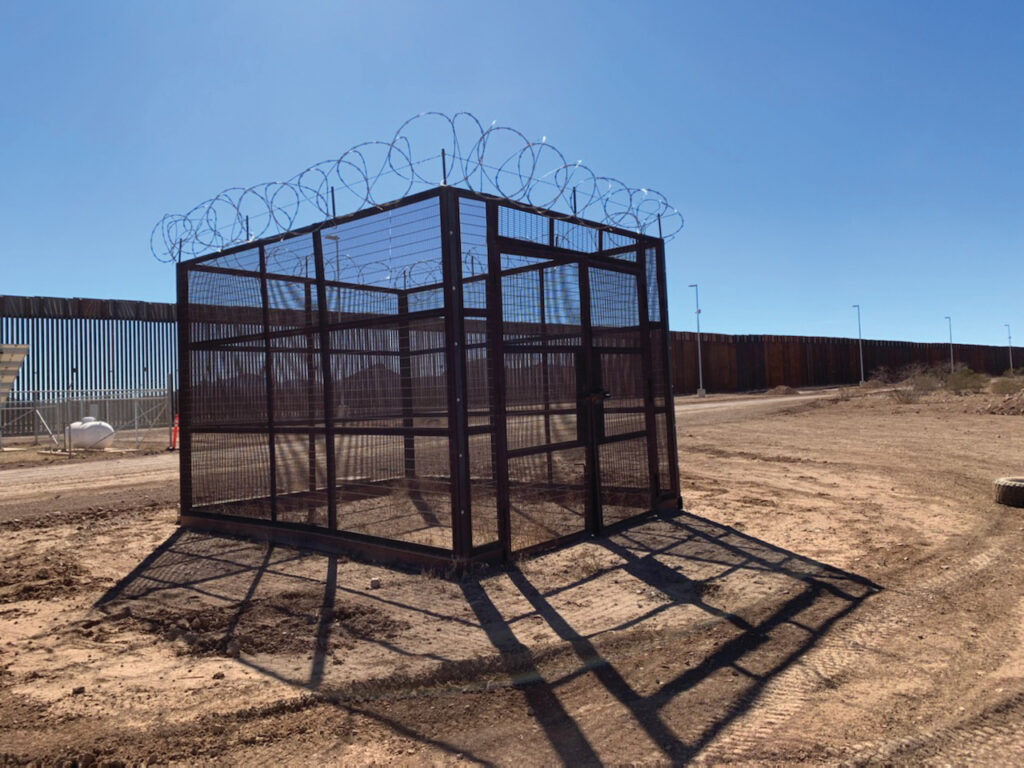 These cages are spaced every few miles along the new sections of border fence. Photo by D.C. Compton.

As I wiggled my fingers in Mexican airspace, my traveling companion said, “Don’t do that,” as if someone might be watching. Someone is watching. Some portion of the nearly 17,000 Border Patrol agents (plus 4,000 National Guard soldiers) keep watch 24/7 along our 1,954-mile southern border. Between wages, benefits, equipment and miscellaneous items like fuel and ammunition, the annual cost ranges upward of $1.8 billion. On top of that, there are private contractors out in the desert helping keep watch. Also, the annual electric bill for the lighting along the fence must be terrifying.

If the fence works so well, why do we need all that? Because it doesn’t work, except to interrupt the natural order of things in the wild spaces of the Southwest. An adult rabbit won’t fit through the fence, much less a javelina or a deer. And they don’t have Sawzalls.

By the way, Mexico is not paying for the wall, as former-President Donald J. Trump promised. We are. According to administration estimates in 2017, the fence was supposed to cost about $22 billion. This was quite a surprise for the budget guys, because DJT promised we could fence the entire border for $8 billion while campaigning in 2016. By January of this year, we had spent $15 billion on construction, and we weren’t half way there. Congress authorized $5 billion. DJT used executive power for the other $10 billion. That’s $20 million per mile constructed. Less than 50 of those miles have been built where no barrier already existed.

Four decades ago, my then-wife and I entered Mexico illegally and quite by accident. As we drove through the lettuce fields of the Imperial Valley on our way from San Diego to somewhere else, she noted that the traffic signs (what few there were) were in Spanish. Oops. We turned around and scooted back into the U.S. No fence. No wall. No problem. It wasn’t as if there was no smuggling or illegal immigration then. The current combination of population pressure, rampant poverty south of the border, obvious prosperity north of the border and huge profits made from drug smuggling have changed the game dramatically.

I have some personal social theories about that. I suspect the failed “War on Drugs” has escalated the price of illegal substances to a point where really bad and really greedy people make so much from trafficking that it has become more worth the risk and the trade has become valuable enough to protect by any means. Ironically, most of the drugs coming across the border are being smuggled through highway checkpoints. This is not a new development.

Tell me again what that fence is for.

The remote border is still dangerous. Friends told of meeting a group of “Mexican soldiers” in northern Mexico who were armed with the latest weapons, including grenade launchers. They were indeed soldiers; but not in the Mexican army, rather in the army of a drug cartel. It was made clear that my friends would be better off elsewhere, which was accomplished without suffering violence; just long moments of terror.

These “armies” also smuggle humans, a number of whom end up dead in their desperation to reach the “promised land.” Many others end up in cages along the fence, then detention centers and then on buses back to Mexico or planes to South America.

When I say “cages” that’s what I mean. Every few miles along sections of the new fence are 10-foot-on-a-side steel cubes enclosed with metal mesh and topped with razor wire. They have a dirt floor and no roof. They are not quite as hospitable as a dog kennel. The Border Patrol has similar facilities at its permanent highway check stations as well. Being locked in one of them must be terrifying for an adult. I can’t imagine how a kid would feel.

What alternatives to stopping — or at least slowing — illegal entry and the drug traffic there might be, I can’t say. It’s a long-term challenge that won’t be solved easily. It is exacerbated by a huge variety and disparity of opinion, self-serving political posturing and ignorance-based fear. I’ve heard people who live much closer to Canada than Mexico declare their xenophobia in no uncertain terms. “Build the wall,” they exclaim, though it’s highly unlikely that they have or ever will have seen it, much less know how it works — or doesn’t. But, as citizens of a country that uses these measures (and our money) to keep people out, or to capture and hold them once they get in, it’s our right and responsibility to know what measures we are paying for, how much we are paying, how they are implemented and how well they work.

The “wall” is really just a porous fence; an ugly, environmentally disastrous and expensive failure; and an embarrassment to our country. That’s what I think.