For newly-hired Sandpoint Public Works Director Amanda Wilson, the appeal of working in a small city is all about having a long-term impact.

Having honed her expertise in rural public works projects over her career, Wilson is well aware of the positive influence a single person can have on a small community through public projects. And for her and her husband, Sandpoint is the ideal community to make that mark. 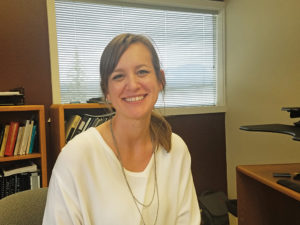 “It really boiled down to me wanting to be a part of something more long term and impact a community in a positive way,” Wilson said.

Wilson’s passion for public works kicked off with an early interest in architecture. After learning more about the field through high school programs, she realized that while architecture wasn’t for her, construction management aligned far closer with her talents and interests. Her first job out of college landed her in Colorado, where she found herself working on a $1.6 billion transportation improvement project.

“The project opened my eyes to all aspects of the construction industry and made me aware of my love for bridges,” Wilson said.

Jobs like that massive transportation project taught Wilson the fundamentals of working hands on with crews while also interfacing with public officials and attending to administrative responsibilities. She also learned the importance of public works in rural areas, especially as she advanced to jobs in Oregon, British Columbia and Alaska.

Wilson first learned about the open Sandpoint public works director position when looking at the city website on an unrelated matter. After investigating the area with her husband, they were instantly taken with the town’s strong community and culture, as well as the beauty and recreation offered by the mountains and lake.

“I think the people here … are exceptionally welcoming and friendly and kind,” she said. “There’s a unique sense of community here, and it really makes me want to do a good job.”

As she becomes more accustomed to her job, Wilson observed that the department is already serving the community well. However, she said there are always ways to improve the services offered to the community, and she hopes to work with the Sandpoint City Council and public to identify those areas of improvement. For the time being, however, she is happy to be working in an area that offers so many amenities.

“It’s a bit corny to say, but it kind of was like love at first sight,” she said.