Newport-area residents are mobilizing for a fight over a proposed silicon smelter, which they believe was sprung on them without any public engagement. 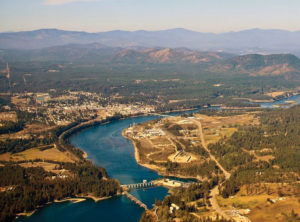 An aerial photo of the Pend Oreille River flowing through Newport, Wash.

At packed meetings this week, Newport residents expressed exasperation that Pend Oreille Public Utility District had sold a 192-acre property to Canadian company HiTest Sand, which seeks to build a silicon smelting plant in the area. While the company touts the number of jobs the new facility will generate, residents believe most will go to out-of-towners and worry that the cost to the local environment, public health and property values may not be worth the trade-off.

“People are madder than hell about this,” said Newport resident John Posk.

According to Posk, residents turned out for two recent meetings, one a public meeting with few opportunities to ask questions and a second, more informal meeting that resulted in standing room only. Some of the concerns raised included the smelter’s impact on the environment, the use of chemicals in processing, the increased traffic related to the factory and the possible hit to local property values. Posk said he doesn’t understand why the smelter isn’t being built in a desert area with no residential population and fewer ecological concerns.