A brush with death at the museum

“D13, shelf 4; D13, shelf 4,” I muttered to myself as I hurried through the archives. I needed to pull one more artifact for tomorrow’s presentation before closing up. Though alone in the large building, I was at ease in the bright lights and familiar surroundings. The tiny coin I sought was probably at the bottom of a box; the entire shelf would have to be searched.

I carefully lowered a pot to the floor, and behind it was what looked like a piece of thick rope, neatly coiled. I lifted it off the shelf, brought it into the light, and my stomach dropped. I made myself take a deep breath and laid the noose out on the floor. Its stout knot looked bright and fresh, but the ends of the rope were frayed into tufts of soft fiber, and gray discoloration lined the noose’s loop. I suddenly wanted very much to be anywhere but alone in the archives. How in the world did the museum acquire a noose? 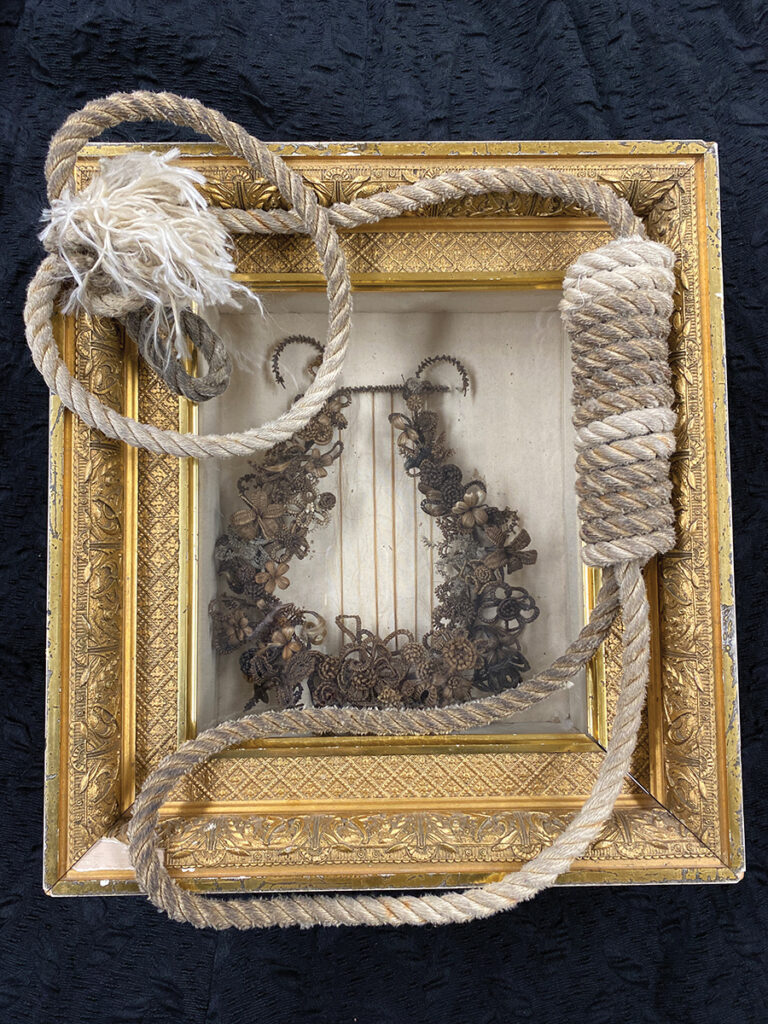 The mysterious noose found by the author at the Bonner County History Museum with no known attribution listed for who donated it or why. Courtesy photo.

There are more than a million objects and archival materials in the museum’s collection, and they all arrived in the same way: because an individual believed that the object has value. Dr. Maryam Afshar wrote her dissertation at Washington State University on object attachment and identified six distinct reasons people assign value to things and hold onto them. But why would they donate them to a museum?

Tax benefits aside, most donations are made for sentimental reasons or what Afshar calls “self-concept” reasons. When a museum accepts a gift from a donor, it promises to care for that object while it is in the collection. The high level of preservation is appealing to someone with sentimental attachments who can’t bear to see family heirlooms neglected or thrown away. Museums can also help tell the story of the object and the people to whom it belonged, preserving the sense of identity that the object extended to its former owner.

Dr. Milhaly Csikszntmihalyi, professor of psychology at Claremont Graduate University, defines the reason people most often save objects as instrumental materialism, in which the object is “a bridge to another person” or to a feeling. To many people, special objects can trigger chains of memory that remind us who we are. A dress may not simply be a piece of cloth on a hanger, but an object that evokes a swirl of twinkling lights, the adoring gaze of a dance partner, even the essence of youth.

The more intensely we feel a particular moment, the more likely we are to make these connections between the event and the objects we associate with it. While our lives are marked by many deeply felt moments, few are as powerful or unavoidable as experiencing the death of a loved one. For this reason, objects connected to death are likely to be held onto and eventually to find their way to the museum. Some objects in the collection are associated with ceremonies that honor a death, some are sentimental keepsakes and some are artifacts connected to the event of the death itself. These associations may be explicit or mysterious.

Two of the Native American pestles in the museum’s collection show the marks of deep cracks on the surface. They were unearthed in the Hope area and may have ties to the Kalispel tribe. It is believed that these cracks are the result of intentional breakage inflicted during a burial ceremony, symbolizing that in death the owner of the tool would no longer have need of it.

Many of us keep objects that belonged to a loved one as a way to honor their memory, but during the 19th century sentimental keepsakes were created from remnants of the loved one themself. According to C. Jeanenne Bell, jewelry historian, Victorian women fashioned creative ways to wear the hair of their dearly departed by weaving it like bobbin lace into bracelets, rings, and brooches. At its culmination, hairwork jewelry designs became so elaborate that people would buy additional swatches of hair to supplement the hair from the beloved; during this period, hair fetched a higher price than silver in some parts of the country. One exceptional example of hairwork, an elaborate “mourning wreath” in the shape of a lyre, was made in the 1880s by Jennie Whitaker and passed down through the Gorsline family before being donated to the museum.

Perhaps the most unsettling are objects left behind that have a direct connection to the event of a death. Lt. Jack Thomas Crawford, while on a “scramble” mission out of Geiger Air Force Base in 1953, was killed when his F-86D Sabre jet fighter crashed into the pole yard of the L.D. McFarland Pole Co. in Sandpoint. The foreman of the plant recovered a scrap of Crawford’s helmet, and it eventually made its way to the museum.

The noose as a symbol always evokes violent death, but this particular artifact sent shudders through me because of what it didn’t say. According to the museum’s database, on New Year’s Day in 2015, the noose was found in the museum’s collection with no note, with no documentation whatsoever. Its story and its arrival at the museum remain a mystery.

Every object in the collection holds within it a story of those who lived and died with the objects, as well as those who held onto them, seeking connection through them. Whether the story is well-documented or not, it demands our respect and care. So with gravity, I coiled the noose back into its place, briskly left the building and took a deep breath of cold, clear air.

Research provided by the Bonner County History Museum, The Atlantic’s article “For the Love of Stuff,” and the book Collecting Victorian Jewelry. At the museum, we are fortunate to be able to preserve and share your objects for a lifetime; consider us if you would like to donate an object that tells the story of Bonner County — even its darkest history.

This article is brought to you by the Bonner County Historical Society and Museum.

Tags: a brush with death at the museumbonner county history museumHannah Combs