Encountering the afterlife in the presence of pets

While others walk around with a distinct and unsettling ghost story in their memories, I am nearly without.

Perhaps I should count myself fortunate in that regard. My creepiest tales are borrowed from years of listening to Scary Stories to Tell in the Dark on tape, or from watching The Ring movies on repeat at slumber parties. 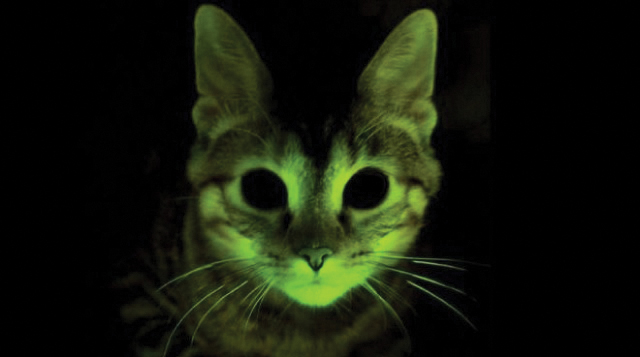 As if cats weren’t creepy enough on their own without the whole ghost thing. Courtesy photo.

The only ghostlike experiences that have truly convinced me that I’m in the presence of an unsettled spirit have involved animals. When I first brought home my cattle dog-mix Mac, a friend of mine said, “Oh, those dogs like to stare.”

Still, I can admit, the intensity of Mac’s stare is far from normal. She went through a phase at  around 6 months old when she would stand in the doorway separating our kitchen from our dining room and just stare into the empty room. Sometimes she would growl or whimper. On some occasions, she’d even bark — but never advance farther into the room.

There were no cars going by on the road outside, no commotion in the yard to prompt her strange behavior. The only answer in my paranoid mind? She was seeing something that I couldn’t.

The house I live in is a century old, and has no doubt seen a lot in its long life. I take solace in the fact that I knew the people who last called this place home, and who bid it farewell when they passed on. Could they have some unfinished business in this world and still be hanging around? I’ve decided that I’d be cool with it if they are.

Would I be cooler with it if Mac would quit making me aware of their presence? Most definitely.

But my most ghostly experience happened when I was around 8 years old, when my dad’s horse, Hickory, passed away. I had very little experience with death at that point in my life — save for a couple of family cats, Rascal and Milo — and had a hard time grasping the loss.

My dad and some family members took care of Hickory’s burial on my parents’ property near some fruit trees in a spot visible from the driveway. Weeks passed, the grass at the burial site began to grow back, and life continued unremarkably for an 8-year-old girl.

That is, until the cat arrived.

I’m sure he hung around for more than the one instance I clearly recall, but once was all I needed to believe that I’d seen something truly supernatural.

Our neighborhood was not known for stray cats casually hanging out in the open, so I immediately took note when I saw one sitting on Hickory’s grave. He had familiar white, gray and black markings, and sat completely still, looking at me. It was Rascal.

My memory only goes that far. I don’t remember if I was in a car or on my bike. I don’t remember him running off or casually sauntering away. My recollection of the event stops at that single, chilling thought.

I remain surprised today that my young brain jumped to that conclusion. Perhaps most likely is that I wasn’t fabricating the thought at all — I just knew. The feelings of eeriness and ghost-story-esque chills come to me only now, as an adult. At the time, it was an easy and comforting conclusion — our ghost cat came to reunite with our recently deceased horse, to say goodbye or, possibly, to lead Hickory’s spirit into the afterlife.

However you spin it, it made me a believer. Happy spooky season.