Sandpoint Planning and Zoning commissioners voted Sept. 7 to delay action on a proposed amendment to zoning code that would clear the way for structures to be built within 25 feet of the high water mark on Sand Creek.

The code change has been in the works for several weeks. Introduced at the commission’s July 20 meeting, senior leaders including City Administrator Jennifer Stapleton, Director of Infrastructure and Development Amanda Wilson and interim Planner Daren Fluke — joined by newly-hired Senior Planner Tess Cooper and Parks Planning and Development Maeve Nevins-Lauter — framed the code change as necessary to provide the city with needed flexibility both to put in place stormwater treatment features, as well as realize the redevelopment vision put forward in the Parks, Recreation and Open Spaces Master Plan.

Commissioners had been scheduled to sit for a public hearing on the code amendment at their regular Aug. 17 meeting; but, citing community feedback, City Hall opted to tweak the amendment to limit its scope and reset the hearing for Sept. 7. 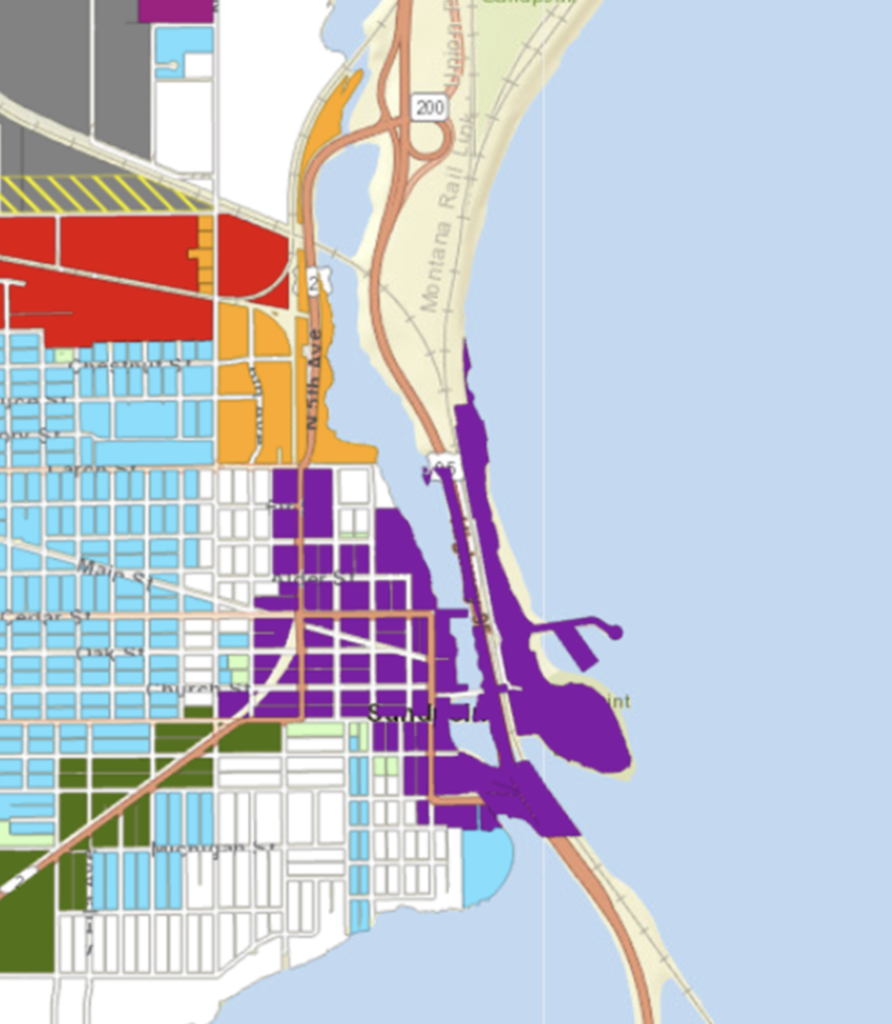 A zoning map of Sandpoint presented at the Planning and Zoning meeting Sept. 7. Courtesy image.

Cooper and Nevins-Lauter presented the revised amendment to commissioners, zeroing in on the definition of “buildings” versus “structures” allowed within the currently established 25-foot vegetative buffer along the creek and — critically — how that buffer is to be established based on the ordinary (natural) high water mark and the “artificial high water mark” established by the raising and lower of the water level by area dams.

Full summertime pool is 2,062 feet above sea level, which marks the artificial high water mark, as it is established by the operation of the dams. Ordinary high water mark, however, can be described as “winter pool,” when waterways such as Sand Creek recede into narrow channels flanked by mud flats.

Currently no structures are allowed within 25 feet of that ordinary high water mark. However, as written, the amended code would have allowed structures such as “bridges, boardwalks, stormwater systems, plazas, walkways, stairways and features, moorage facilities, stream stabilization, art features and other functionally dependent water uses” below whatever high water mark is applicable — either ordinary or artificial — per state and federal rules.

As Fluke said, “ The take-home for the commission in this case is that buildings are allowed within 25 feet [of the water] … full stop. What can exist in the water is those water-dependent uses.”

That worried Commissioner Cate Huisman, who asked whether the code change would open the way for intensive development close to the water’s edge not only in the so-called “downtown waterfront” between the U.S. 95 byway overpass and Cedar Street Bridge, but all the way up to Popsicle Bridge to the north — the area that would be affected by the ordinance change, as defined by planners in their Sept. 7 presentation.

“What if someone finds an environmentally friendly way to put a hot rod track up there? Do we have no say?” she asked.

Commission Chairman Jason Welker agreed, requesting that a conditional use permit be required for any structure — regardless of type — built anywhere within 25 feet of either high water mark, thereby triggering a public process.

“You need a conditional use permit to sell barbecue ribs from a food truck on Cedar Street,” he said, underscoring that any waterside development needs to make its case before the city first.

“We would not have approved the amendment as it was proposed last night,” Welker told the Reader after the meeting. “We’re giving city staff time to rework it to a level that satisfies the P&Z Commission. …

“The citizens need to be given the opportunity to provide their input into what’s being built in that 25-foot setback,” he added. “It’s our waterfront.”

Commissioner John Hastings also requested that staff return with a further amended ordinance that requires Sand Creek development within the 25-foot setback not only protect but enhance water quality via stormwater treatment features.

While the detail and data presented at the almost-three-hour meeting Sept. 7 could feel “dizzying,” as resident Clay Hutchinson rightly put it during public testimony, city officials say the change is intended to bring simplicity to the zoning code along the waterfront and, as important, bring the code into step with the myriad other agencies and organizations that have jurisdiction over the waterways. Under the current rules, for instance, the Cedar Street Bridge itself would not be allowed.

More to the immediate point, none of the stormwater or recreational features — including public gathering places such as a plaza and various other creekside amenities envisioned in the Parks and Rec Master Plan — would be possible without the code change.

“Yes, we need to have the code change in order for us to move forward with the downtown waterfront designs and we have budgeted engineering and design and some construction work in this fiscal year’s budget [for it],” Stapleton told the Reader after the meeting.

Nevins-Lauter, who recently took a position with the city from previous planning and parks development work in Alaska, told commissioners Sept. 7 that, “without this code revision we would not be able to realize what we’re looking at” with the Parks and Rec Master Plan.

“I have fresh eyes,” she said. “When I look at your waterfront and greenbelt … I see this as your front door. … I’m seeing endless opportunity for public access.”

However, Nevins-Lauter said, the downtown creek area has already been substantially altered, and not necessarily to its benefit.

“When we talk about the Sand Creek area, none of that is natural and all of that has been disturbed in the past,” she said, stressing that opening more areas along the waterfront available for redevelopment would make “that man-destroyed area just so much better from a sustainability perspective.”

The city purchased the creekside property between Bridge Street and the backside of the Panida Theater — variously described as the downtown waterfront, Gunning’s Alley and “Farmin’s Landing” — in 2016 with the express purpose of improving stormwater management. As officials have repeatedly stated, downtown essentially drains into Sand Creek.

“The primary purpose of the purchase was stormwater management,” Stapleton said, though also cited 20 years of conversation about how to accomplish both economic vitality and water quality improvements.

“That’s what the code change is really about,” she said.

Public testimony at the P&Z hearing Sept. 7 was sparse, though did draw some voices. Steve Holt, executive director of the Lake Pend Oreille Waterkeeper, said his office on the Cedar Street Bridge has been “inundated” with calls related to violations of vegetative buffers on development sites throughout the county. He applauded the commission’s push for more public oversight of building within the 25-foot setback via the CUP process.

Longtime area resident Rebecca Holland also testified, reminding commissioners that when the city purchased the Farmin’s Landing property it also intended to incorporate a bicycle route, which she said has been ignored in subsequent planning.

“The concept of the whole area being turned into a commercial zone — I’ve been here almost 50 years, and I’ll tell you there’s not a whole lot of people who want to see that happen,” she said.

The code amendment will return to the Planning and Zoning Commission on Tuesday, Sept. 21 at 5:30 p.m. in the City Hall chambers (1123 Lake St.). Participate remotely by going to sandpointidaho.gov and click on “Meetings” on the home page.