“It’s all my mom’s fault,” said Vicki Reich, when asked how her collection of international dolls began.

Reich’s 200 dolls currently on display in the foyer of the Sandpoint Library represent a collection she has possessed since she was a child, all thanks to her mom. 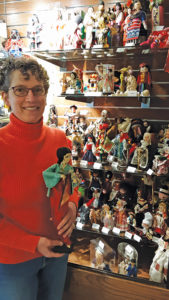 Vicki Reich holds the first international doll that started the collection, a doll from Korea. She now has almost 200 in the collection. Photo by Ben Olson.

“My mom really liked the idea of having collections,” Reich said. “When she died, she had over 300 frogs. She wanted me to have a collection, too”

Reich pointed to a doll on the top shelf of the display at the Sandpoint Library and identified it as patient number one.

“That one was from Korea,” she said. A neighbor at Homestead Air Force Base in Florida, where Reich’s father was stationed at the time, brought that one back from Korea during his time in the service.

Reich said her parents traveled abroad at least once a year and started bringing back an international doll from every country they visited. The collection fed itself from there.

There are dolls from dozens of different countries, each souvenirs that represent the cultural heritage of the place they originated. A large portion of the early dolls came from Reich’s parents, but in recent years, friends and loved ones have started bringing them back to add to Reich’s collection.

Displayed next to the Korean doll that started it all stands the latest member of the menagerie: a doll from Taiwan Reich’s step dad brought back from a recent trip.

“When my parents were traveling, these dolls were everywhere,” Reich said. “Now, they’re a little harder to find. Sometimes people have to go on adventures to find them.”

Fifteen years ago, when Reich was living in Moscow, she displayed her collection in the Moscow Public Library. It numbered 124 dolls then, but has grown to 197 dolls today.

Reich jokingly admitted she is somewhat of a reluctant steward of the dolls.

But for Reich, the dolls represent more than just a collection — they are a connection to the culture of each country represented, as well as a legacy handed down from her childhood.

“The Spanish dancers all look the same, but the ones from France are all so different,” she said, pointing out the collection through the display case. “I definitely have some favorites. The one in the green coat was from Greece. The layers and layers of dresses she has on are amazing. Also, there’s a Maasai Tribe doll from Kenya with real rubber from tires for its shoes.”

Reich enjoys owning the collection because of the sentimental value, but also because it provides a fun quest for traveling friends and family.

Check out Reich’s international doll collection at the Sandpoint Library, where it will be displayed in the foyer until mid-April.