When You’re Smiling: Part 3 (The Finale)

This was originally intended as a two-part feature matching happy Sandpoint citizens with upbeat songs from aged vinyl records. However, after a mob of Reader readers stormed the newspaper’s offices demanding inclusion, this cowardly writer obliged with an additional effort. You might ask, so what happened to all that ballyhooed happiness? Nothing happened. People who populate this chapter will be just as happy as those in the previous two, once they see their names here. What makes Sandpointians happy is not just local music and art, our library, super public schools and teachers, the lake, ski mountain and restaurants. No, sir. It’s being in the Reader. 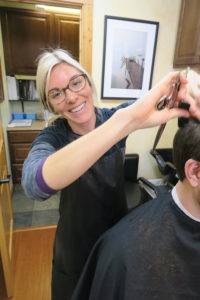 Kaelin Sutherland is all smiles at Hair Unlimited. Photo by Ben Olson.

Supermarkets are great places to see happy people. With a smile that lights up the parking lot on a gray day, a familiar lady rushes up and says, “Hey, I’m Tyson’s grandma. Spring is right around the corner, see you at soccer!” Her name is Jean and grandson Tyson is a soccer star. Jean is one of countless enthusiasts who spend soccer Saturdays at Farmin-Stidwell school. A vinyl recording to match her happy attitude? How about “Good Vibrations,” by The Beach Boys.

At supermarkets one also meets kids like Preston, Malcolm and Eliana. They bag groceries, perform their basic tasks with aplomb, and chat merrily with customers. So do cashiers like Ashley, Roberta and Ron. Pairing such positive people with a song is easy. How about “You’re Never Fully Dressed Without A Smile,” from the Broadway blockbuster, “Annie.” “Who cares what you’re wearing on Main Street or Saville Row… it’s what you wear from ear to ear, and not from toe to toe.”

That tune also fits bubbly baker Marla, who lives with husband and dogs near my 1957 bride and me in the forest. That’s not her fault. They were there first. Recently our intrepid mutt, Tippy, sniffed through the woods to visit Marla’s dogs. Marla telephoned and then, Tippy in the passenger seat, met me at the end of her lane. As if on cue, another good-Samaritan lady drove up with two dogs. As luck would have it, one was Marla’s. Unbeknownst to mom, he had taken himself for a stroll.

As we sorted out dogs, Marla’s relatives Elke and Chip, who also live in the hood and own gorgeous horses, came putt-putting up in a tricked out go-cart. Black lab Maggie was aboard. Hoo boy! Amidst the sniffing, piddling and woofing it was so doggone much fun we considered sending out for sushi, right there in the road. A song to pair with this joyful assemblage? How about the Stan Kenton band with songbird June Christy, “… I got a ranch  in Arizona, a yacht in L.A., a house in San Francisco overlooking the bay… I can’t lose ‘cause I got no blues… and there Ain’t No Misery In Me.” That works. 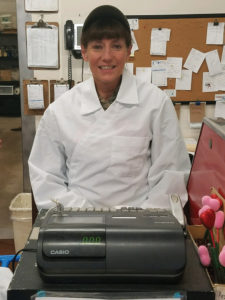 I buy hefty beef bones for our dogs at Woods out on 95. Half the fun of going there is Rosy, who appears to be about 28 and has worked there 35 years. Rosy radiates cheer as she boxes up smokies and steaks. She makes me think of composer Cole Porter. She doesn’t look like him, but he wrote songs about her. Tunes like “You’re The Top” from Broadway’s “Anything Goes.” “You’re the Nile, you’re the tower of Pisa… you’re the smile, on the Mona Lisa.” Or how about this by Phoebe Snow: “Don’t sit there mumblin’ and talkin’ trash, if you wanna have some fun you gotta spend some cash… so Let The Good Times Roll.”

Those optimistic lyrics apply equally to perky Kaelin at Hair Unlimited. At risk of being labeled a sexual predator like creepy Donald Trump and Harvey Weinstein, I suspect that Kaelin might be the prettiest barber in Idaho.

There are many cheery, buoyant Sandpoint citizens who sparkle when you meet them. Too many to laud here. So let’s doff our cap to a representative few who make living here a treat: Spunky Janice who founded the film festival; Kim, who works at Petal Talk, but behind the scenes, as she does at the follies; Hefty Brian and son Chris at All About Chimneys, who bring glad tidings when they come to repair a woodstove; Sahara and her beaming wait staff at Fiesta Bonita to whom there’s nothing so important as making you glad you’re there; Banking moguls Michael and Drew at Wells Fargo, both dressed to the nines in bright shirts and bow ties, and conjuring up the Fred Astaire gem, “Top Hat, White Tie And Tails”; Waiters Sabrina and Maia at Baxter’s, whose welcoming spirit contrasts starkly with grumpster boss Tommy. Tommy? A grumpster? Yes.

After parking the car I attempted to join my family of seven, already seated and slurping Bistro Rouge. They included our elderly children from Park City, Utah, whom I always attempt to impress with my social clout when they visit. Tommy saw me coming, sprinted across the floor, grabbed a handy CLOSED sign and slammed it against the front door. The family, naturally, was horrified. Fortunately it was the holiday season so I simply slid down the chimney. 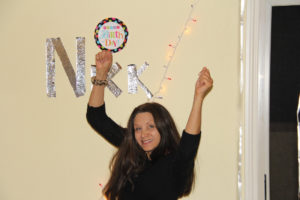 Janice Jarzabek, doing what she does. Courtesy photo.

As I slid I hummed “When You’re Smiling, when you’re smiling, the whole world smiles with you…” And everything turned out fine, as it always does in Sandpoint, Idaho, USA.