Healing on the Vine: an Ayahuasca Experience

In 1952 the legendary Beat writer William S. Burroughs slipped into the vast emerald interior of the Amazon rainforest in search of Yage — what is now known in popular culture as Ayahuasca — the psychoactive vine brew renowned for its medicinal properties. He may not have been venturing forth so much toward a mystical experience as he was running away from his nightmares. Among these were a dead wife he left behind in Mexico City and a pesky opioid addiction that would dog him down for decades. 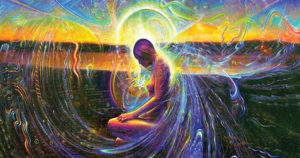 “This is the most powerful drug I have ever experienced. Yage is not like anything else. It produces the most complete derangement of the senses!”

A decade later, two Harvard psychology professors, Timothy Leary and Richard Alpert, began research into the effects of the psychoactive mushroom Psilocybin for its potential therapeutic benefits. One of the papers released from their work was the Concord Prison Experiment in which inmates were given Psilocybin to reduce recidivism. Within two years the project was shut down due to concerns over the legitimacy and safety of the experiment. Soon the two rising academic stars were thrown out of Harvard and cast into the lot of the major figures of nascent counterculture. It would be decades before the therapeutic benefits of psychoactive drugs were again studied in earnest.

It wasn’t until the 1990s that a new generation of FDA officials made an effort to ease the prior harsh restrictions of the ‘60s. This again opened the door to research into the potential advantages of psychoactives, including palliative care and anxiety treatment. Meanwhile, slowly simmering on the back burner was a cauldron of a mystical brew that was not being stirred up by Ivy League Ph.Ds, but by jungle shamans versed in knowledge passed down since time immemorial.

Adrian McDowell, a local carpenter in his late ‘50s, speaks in the slow and measured tone of his native Orofino. Since early memory Adrian has struggled from the effects of depression. He plodded through early life in an anemic haze, always on the margins, left with few friends and developing an introverted personality. By high school he was loner, spending large portions of his time in the school woodshop.

By his early 20s, Adrian began to seek professional help in what would become a nearly 30-year odyssey into the byzantine world of antidepressant drugs. In the late ‘90s Adrian and his wife moved from Sandpoint to Pennsylvania as a career move. It was here that he learned of a study at the University of Pennsylvania State’s depression research unit. They were searching for people of a certain criteria that would partake in the research of SSIR drugs. The study would last three years. Adrian signed on and began the study in 2004. Selective serotonin reuptake inhibitors are powerful antidepressants that, in effect, alter the flow of the neurotransmitters. The study began in small doses and increased over time. Initially the efficacy of these drugs seemed to have a positive outcome.

As Adrian related to this writer, “You feel an elation you have never had before. The sky is bluer colors crisper, the world seems more doable.” However, the ups were always followed by a downturn. Tired of the negative side-effects and disillusioned with the program, Adrian abruptly dropped out of the study three months shy of completion.

In 2011, Adrian was thumbing through a National Geographic Traveler when he noticed an article written by a woman who experienced transformation with a guided ayahuasca tour called Blue Morpho in the Peruvian rainforest. As she suffered with similar issues with depression, this piqued Adrian’s attention. Within two months Adrian had booked his flight to Peru. He was a novice, never having had any experience with psychotropic drugs. He arrived with the beginner’s mind, of which Zen practitioners say “has many possibilities”.

Iquitos, Peru, is a city of 400,000 inhabitants. Situated on the banks of the Amazon River, it is the largest city in the world not connected by road. The Blue Morpho headquarters is located in the jungle several miles outside of town. Its director is American. Employed under him is the shaman and his apprentices. The group tour included 12 other participants from all walks of life, each with their own reason for being there. A handler, or apprentice, was assigned to each individual to watch over them during each ceremony.

Day one was spent in the field with the shaman gathering the ayahuasca vine and several other leaf components that make up the brew. They cut, strip and pound the root and leaf before putting it into a large cauldron which was then put to simmer overnight. The following day the ceremony commences. It takes place in a large thatch-roofed pavilion with a front stage accommodating the shaman. In front of the shaman sits the director with a Tibetan singing bowl. In the back are situated bathrooms which facilitate any purging (i.e. vomiting and diarrhea), which is characteristic to the drug.

Adrian took his dose from the shaman in a small cup. After ingestion he walked back to his mat and lie on his back with eyes closed. As the bowl rang its vibratory song, the group began to feel the effects.

In the Yage letters, William S. Burroughs describes his experience, “It was like going under ether, or when you are very drunk and lie down and the bed spins. Blue flashes passed in front of my eyes. I was hit by violent, sudden nausea and rushed for the door hitting my shoulder against the post. I felt the shock but no pain. I could hardly walk.”

For Adrian the experience had a more calming effect. Other than the shrills of women around him bursting into hyena-like laughter and the man next to him whining like an injured child he felt an intense feeling of calm and contentment. The eight-hour journey passed him by in a flash. Finally, the singing bowl wound down, the handlers roused their charges and the group went back to their respective beds to rest.

The nine-day program was scheduled to have five ceremonies with a Q&A and group discussions on the intervening rest days. The second ceremony did not go as well, and Adrian experienced a profound letdown. In the off hours he watched as the director acted in an erratic and pompous manner. Much like the Penn State research program, he opted out early.

Back home Adrian continued seeking out different modalities of treatment, one of which was Brain Balancing Technology. Today Adrian is living his life free of antidepressants, “winging it” as he calls it. “There were positive aspects of the ayahuasca experience that have stayed with me to this day, but it was just one piece of the larger puzzle. Life is not perfect, but it is doable.”

If there is a moral to this story, it may be that there is no magic bullet. Living in today’s 21st-century American pressure cooker requires constant vigilance, hard work and personal growth. Adrian McDowell is an exemplar of this modality.