It’s tough being a golf nut in North Idaho. First, we’ve got these long, cold winters that seem to last forever. Then, once the snow is gone in the spring, we have to wait until the golf courses are dry enough to support foot traffic. At best, golfers usually only get about half the year to hit the little white ball around. A lot of bad kinks can happen to a golf swing in six months of inactivity.

Thanks to John Bonar and Jeff Boger, there’s now hope for year-round golf in North Idaho. 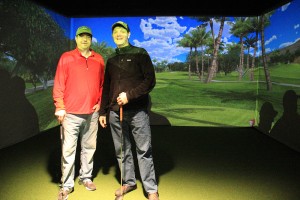 “We went up and skied until about eleven, had some beer and pizza, then teed off for our 12 o’clock tee time,” said Ralph Lotspeich, PGA professional for Mirror Lake Golf Course in Bonners Ferry.

Sandpoint Country Club has been a dream for Bonar and Boger for years, but it was too far out of reach until recently.

“We’ve been wanting to do this for about four years, but the simulator technology was just too expensive,” said Bonar. “The simulator reps usually recommend having a city of at least 100,000 people to get full use out of it. That turned us off at first.”

But, last Christmas when Bonar was shopping in Coeur d’Alene, he was able to find a cheaper (and better) way to make indoor golf a reality for a town the size of Sandpoint.

“While shopping in the Silver Lake Mall, I heard the familiar sound of golf shots being hit,” said Bonar. 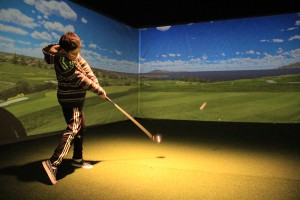 Scarlett’s simulator system doesn’t use any clunky sensors, but instead utilizes two high-speed cameras that capture the ball’s flight from the tee and project the flight path onto the digital screen after the shot is struck.

“The yardage feels really good,” said Lotspeich. “The hardest part is chipping and putting, but I’m starting to get the hang of it. It’s just a blast. Way better than hitting into a net.”

There are two stalls available with simulators featuring 90 different golf courses, 85 of which are real courses. The other five are “fantasy” courses that don’t exist in reality.

Being a former golf professional, I can testify that the experience was far better than any golf simulation I’ve played before. The hitting mats approximate grass, while still allowing a tee to be pushed through without doing damage. The intelligent design of the simulator allows the golfer to see a realistic interpretation of what their shot might look like in reality. You don’t just hit into a screen, but instead, three big screens surround you, giving the feel of really standing on a course. After two holes, all three of us were hooked.

Part of the appear is that Bonar and Boger work hard to promote a relaxed, family atmosphere that appeals to both the experienced golfer as well as novices.

Speaking of novices, Bonar and Boger have made it really easy to come out and swing some clubs even if you’ve never played before. Bonar was once a PGA professional at Hidden Lakes Golf Resort, and is always happy to give free pointers. You can even use loaner clubs for free if you don’t have a set of your own.

The simulator allows a lot of different combinations of elements. You can choose a sunny day, or go for a rainy, windy experience without getting a drop of rain on you. The side spin has been set to 25% of reality, which means if you’ve got a wicked slice in reality, the simulator helps correct it a little bit.

“We’ll gradually increase the spin ratio over time,” said Bonar. “If we were to program it at 100%, the game would be so difficult, you’d leave and never come back.”

The rates are pretty straightforward. It’s $40 an hour to play, no matter how many players. It takes roughly one hour for a person to get through 18 holes, or two people can usually get through nine holes in an hour. The hot deal so far is buying a ten-hour punch card for $300, which saves you $100.

The 3,300 square foot operating space has plenty of room for private parties. One of the simulator booths even doubles as a gigantic screen home theater for an epic television watching experience. There’s also a putting green and a room to store your golf clubs if you want to become a regular.

If you like to use “aiming juice” while playing golf, they plan on having their beer and wine license by February. There are also plans in the future to offer lessons.

“One of our goals is to make golf more accessible to people, even during summer,” said Bonar. “There’s never anybody behind you pushing, and you never have to follow a slow group. You can play at your own pace and stop whenever you want.”

There are monthly tournaments for members of the golfing community to participate in, like this month’s 9-hole scramble at four different courses. Players come in and post their scores and are able to compete in friendly competitions.

While it is sometimes possible to “walk on” when it’s slow, Bonar strongly suggests calling in for a tee time to ensure minimal waiting. Who’d have thought? Golf in January? Awesome job, guys.

The Sandpoint Country Club is located at 75 McGhee Road, across the street from the former Coldwater Creek campus. For tee times and other information, call (208) 627-4000.