Solar Roadways is back in action at Jeff Jones Town Square.

After a somewhat rocky debut in October, the Solar Roadways demonstration is once again online with fully functional panels. The webcam feed is also live at the city of Sandpoint website—www.cityofsandpoint.com/visiting-sandpoint/solar-roadways. 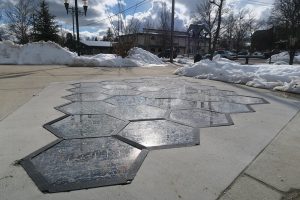 “Now we can all enjoy watching the panels and the visitors once again,” wrote company co-owner Julie Brusaw on the company’s Facebook page.

The world got its first glimpse of Solar Roadways technology last fall, when the company and city hosted a press conference and introduced the first installation. However, a malfunctioning laminating machine, which cooks all the components together, damaged the initial batch of panels, frying several LED sets and disabling their power-generating capabilities.

Company personnel finished installing the new set of panels Sunday, returning color and electronic flair to Jeff Jones Town Square. The demonstration is intended to both show off the technology and provide an educational experience, illustrating how solar power works through an interactivity. According to Sandpoint City Planner Jennifer Stapleton, additions to the installation are coming in a few weeks that will enhance that experience.

“We’re working on the interface to show energy utilization and generation,” she said.

After launching to viral, worldwide fame through its crowdfunding campaign, Solar Roadways has been heralded by the city as an example of local innovation. The company’s panels are designed to be walked, biked or driven over, their high-strength glass housing solar power cells. Solar Roadways’ ultimate goal is to make the panels a viable alternative for concrete or asphalt surfaces, generating power while still meeting transportation requirements. In addition, the panels are capable of melting snow and ice with a heating element and displaying messages, patterns or traffic lines through LEDs.