Good Night, Idaho is not the first fictional town from the Idaho panhandle that Keith Lee Morris has used in his fiction, but it may be the oddest.

A Sandpoint High School graduate, Morris acknowledges that North Idaho has left an indelible impression upon his memory. His parents were both teachers at SHS, and he still keeps in contact with a lot of folks in the region. That’s why North Idaho is often used as the locale for his works of fiction. 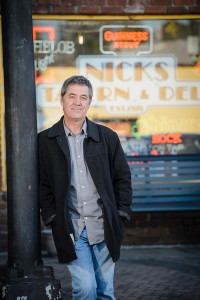 “I still have a lot of good friends here in this area,” said Morris. “They are people that I care about a great deal. When I start coming up with ideas for fiction, [North Idaho] seems to be the default setting.”

While visiting a friend in Wallace, Morris began the formulation for a new novel, published this year by Little, Brown and Company.

“On one of my visits to Wallace, I had a friend that had access to an old, abandoned hotel,” said Morris. “Wallace has a lot of secret passageways that wind around underneath buildings. Something caught my attention and got my imagination going while I started writing this novel.”

The result is “Travelers Rest,” a chilling tale of a family that gets stuck in North Idaho under a mountain of snow and strange occurrences.

The story opens with the Addison family in the car heading east through the Idaho panhandle during a blinding snowstorm. Tonio, the patriarch, is a finicky anthropology professor driving his screw-up brother Robbie back to their home in South Carolina as part of a court-ordered rehabilitation program. Tonio’s preoccupied wife Julia suggests they get off the interstate and out of the snow, pulling into a town called Good Night, Idaho (inspired by the historic mining town Wallace). Rounding out the family is Tonio and Julia’s precocious 10 year-old son Dewey.

The family pulls into a dilapidated historic hotel called “Travelers Rest” seeking a room for the night. While Tonio expresses dismay with the choice, Julia urges them to stay, seeing something in the old husk of a hotel that appeals to her. They turn in for the night, and the adventure begins. 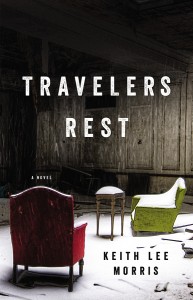 Each member of the family is separated in the creaky old hotel, and the novel follows the foggy, ethereal adventure each embarks upon to reunite. Morris gives a nod to Stephen King’s masterpiece “The Shining” with his elements of horror and mystery. He also channels Marcel Proust beautifully with his willful choice to eliminate plot as the central driving force, instead focusing on each character’s journey through time, memory and space.

They fumble about the empty hotel and surrounding areas of the town, the snow never ceasing, as if they’d been trapped inside a snow globe shaken repeatedly by a petulant child.

The snow is the elusive fifth character in “Travelers Rest.” It is ever present, and while reading further into Morris’ fictional dementia, the reader can almost feel the cold flakes piling up on the pages.

“Travelers Rest” is the perfect marriage between a thoughtful treatise on involuntary memories and a closet horror novel. Morris, however, doesn’t utilize any of the traditional horror novel gimmicks, but instead tells a compelling story that somehow leaves the reader feeling uneasy, yet desperate to keep turning the page.

I particularly enjoyed the slight differences in narrative tone that Morris employs with each character; for Tonio’s story, he takes on a fussy, rushed tone. For Julia, the narrative wanders with her meandering mind. Dewey’s narrative employs the use of a more childlike feel, while Robbie’s section is told as if through the myopic haze of a recovering alcoholic.

The dreamlike narrative continues throughout the entirety of the novel until the end, when a great suspenseful finish brings it all into focus.

Author Keith Lee Morris is a professor of creative writing at Clemson University. He will be reading and signing copies of his book “Travelers Rest” at 6 p.m. on Friday, Jan. 15 at Bernd Barrel in Sandpoint.