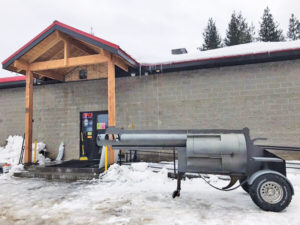 All the more appropriate, then, that the business is expanding its services to bring Bonner County its first fully-featured indoor shooting range, providing a safe environment for local marksmen and women to hone their accuracy rain or shine, summer heat or winter snow.

According to Wrenco Arms owner Brendon Terry, an indoor shooting range has been a part of his and his wife’s vision ever since they bought the business in 2015. It’s only now that vision is about to become a reality, following two years of planning, financing, construction and legal wrangling. Beyond courting all kinds of firearm enthusiasts, the range also provides options for archers to practice with bows and arrows.

“We wanted to make it really a destination for sportsmen,” said Terry.

Of course, the first step was to determine whether a shooting range would thrive in a lesser-populated area like Bonner County. Terry said he knew an indoor range was something community needed — he just needed to ensure it made sense from a financial perspective. Because Bonner County is a destination for sportsmen and women all around the world, however, he was confident that a range would find the customer base it needed.

The first priority at Wrenco Arms’ new gun range is safety, and its importance can’t be overstated. After all, even otherwise-responsible shooters can’t always guarantee they’re firing in a safe direction outside a range’s controlled environment.

“There have been instances of errant rounds going near where kids are playing,” Terry said.

A properly-maintained range is one of the few locations where shooters can rest assured their bullets cannot possibly do anyone any harm. To that end, the range is outfitted with a combination of steel and rubber construction materials, ensuring that a bullet fired in the range stays in the range.

“The entire length is covered in steel baffles which prevent any errant rounds from exiting the building,” said Terry.

What’s more, the range is designed to provide shooters a comfortable environment while target practicing. The range itself is 25 yards with 10 lanes, and it features an air movement system to ensure smoke doesn’t accumulate when multiple weapons are firing at once — a consideration that will definitely be welcome for members’ eyes and lungs.

Speaking of members, there are several options to accommodate anyone’s needs. Discounts are available for veterans and emergency personnel, and there are even a limited number of lifetime memberships available for individuals who know they’re staying in Bonner County for a good, long time. The lifetime memberships are pricey, Terry said, but it’s a one-time fee that he estimates will pay for itself after several years.

Still not convinced? Maybe it’s time to fire off a magazine or two at the range itself. Luckily, the Wrenco Arms’ grand opening event provides a chance to do just that — free of charge. Set for this Saturday, March 16, from 10 a.m.-5 p.m., the day will include free food, free range shooting, a wall of guns raffle, tours of the facility and discount machine gun rentals. Just drop by the range, 478338 Highway 95 in Ponderay, and join a growing community of enthusiastic shooting fans.

“I think there’s a large group of people that are already excited (about what we’re offering,)” Terry said.