Workers of the world, divide!

An aristocrat’s guide to divide and conquer tactics

It all started going downhill with the advent of that wretched Gutenberg press (if only we could have intervened and outlawed its production). ’Twas hard to predict what would result from it — even Nostradamus didn’t see it coming — but it would eventually become apparent that, if we didn’t alter our strategy, us aristocrats would end up going the way of the buffalo. 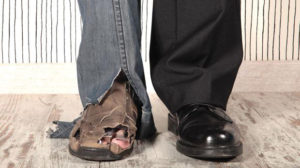 What is the Age of Enlightenment? It is an affliction, nothing more. Uppity peasants have been spreading their infectious diseases of freedom and democracy across the land for centuries now. The malignant growth of “equality” has metastasized to the hearts and the minds of our otherwise dutiful subjects. Behold, there has never been a worse time to be a member of the ruling class.

Sadly, that is a bygone era. But do not sulk with nostalgia, ye noblemen, rejoice! ’Tis not twilight for the aristocracy, but a new dawn. Lo, my poor-rich brethren, one can easily manipulate the plebeians to quarrel amongst themselves instead of us.

There are predators, and there are prey, ’tis the way of nature. The abhorrent social construct they call “justice” runs counter to everything in the biological world. The strong prey on the weak. That is the law of the jungle; that is justice! But the weak, with their narrow craniums filled with naive notions of “progress,” have strength in numbers. It is essential to the perpetuation of our sovereignty that we diminish that strength by dividing them into smaller, more easily subjugated factions.

Of course, divide and conquer tactics go way back; but with the rise of this loathsome new trend of “collectivism,” which is the biggest existential threat we face, it behooves us, the privileged elite, to intensify our efforts to divide. Henceforth, our subjects will focus exclusively on what separates them and not on what unites them.

Thou must learneth to emphasize race, gender, income, sexuality, religion, and anything else which can be used as a tool to divide the rabble. Remember, do not let it be known that thou wishes to be divisive. It helps to utilize thy shrewdness by appearing to be a champion for particular “downtrodden” identity groups. “Equal rights, yay!” Nay. But pay heed, ruling class, it is important that thou hide thy treachery underneath the pretense of a raised fist.

In the golden age of our reign, back before the peasants had “freedom of speech,” scoundrels like Noam Chomsky would be dealt with swiftly and aggressively. (Uppity commoners tend to find it harder to raise their voice when there are nooses around their necks.) Our forebears would turn in their graves if they could hear the drivel we permit the modern plebs to spout. Chomsky was right about one thing though: “Propaganda is to a democracy what the bludgeon is to a totalitarian state.” Unfortunately, we cannot control people by force anymore, hence our desire to control their minds (i.e. turn them against one another). Thanks for the tip, Noam, ye filthy anarchist.

Those who chooseth to exercise their freedom of speech by rabble-rousing must be our primary concern. The public must see them as a threat; unless, of course, thou doth wisheth to suffer the same fate as King Louis XVI. Don’t forget, a tiny ember, if left unchecked, can give rise to an inferno of insurrection. Douse and deprive dangerous ideas of oxygen before they spread!

Fear tactics are an essential component of the divide-and-conquer strategy. Thus, when dividing thy subjects, it is important that thou useth fear. Critics must always be regarded as an “enemy of the people.” They shall be denounced as unpatriotic, and as traitors. With division, mistrust, and hatred, the underclass will fail to organize against us. The poor and the middle class should have so much fear, contempt and mistrust for one another that they will fail to notice the cattle prod we’re using on them.

The uneducated are an easily managed demographic (’tis why we oppose public education). To keep these sad specimens from reaching for their pitchforks thou only needeth to provide a good selection of beer on tap, along with a steady flow of public spectacles to keep them divided and distracted.

Ye dukes and duchesses did not inherit land and wealth just so thy hard-earned fortune could be taxed and spent on feeding those “in need” (they seem to think that food grows on trees). The masses must be convinced that those who seeketh to raise taxes on the rich are nothing but thieves and communists. Remember, the more they tax thee, the less money thou will have to erect gargantuan bronze statues of thyself.

Money is power! Naturally, since we are the ones with all of the money, we should be the ones with all of the power. But democracy threatens the natural order of things. Democracy is the triumph of the vassals over the feudal lord. Sadly, we could fill our coffers until they burst at the seams, but we would still only be allowed one vote (what a dreadful and unfair system). However, by dividing people into different voting blocs, and by convincing bloc A to despise voting bloc B, and visa versa, we can essentially manipulate our constituents to vote however we want them to — even against their own interests.

Again I say to thee, my brethren, ’tis not the time to sulk, but to rejoice! For the proles are just pawns on our chessboard: moving in the only direction we allow them to; fighting with each other when we instruct them to.

Now go forth, ye blue-blooded aristocrats! Unsheathe thy blade, and cut the “proletariat” into pieces.

Tim Bearly currently resides in Sandpoint, where he occupies his free time by writing subversive songs and essays. He can be lambasted via email at [email protected]