Media literacy is a patriotic duty

In 2016, an event called “Citizens Before Refugees” went live on Facebook.

Scheduled to take place at the Twin Falls City Council Chambers, the protest was hosted by an organization called Secured Borders and followed a slew of anti-refugee about Twin Falls stories published by right-wing media. Although sparsely attended, the event attracted 48 people who declared interest and was likely seen by many more. The Facebook page for Secured Borders had 133,000 followers before it was shut down.

A year later, The Daily Beast reported that the “Citizens Before Refugees” protest was in fact a scheme cooked up by a Russian front. 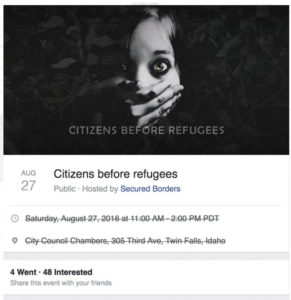 An inflammatory post by Secured Borders that invited citizens of Twin Falls, Idaho, to a meeting about Muslim refugees. Courtesy Facebook.

This troubling story, unique in its influence on Idaho politics and culture, is just a tiny corner of the Russian effort to undermine public trust in American institutions. Revealed in detail by recent Mueller investigation indictments, the misinformation campaign underscores a new reality for Americans: It is now our civic duty to be media literate.

If one thing is clear from journalism and court documents, it’s that almost everyone is vulnerable to misinformation campaigns. They thrive in any corner of public discourse where there is ideological intensity, partisan loyalties or simply a desire to be right. Russian fronts most famously assisted the Donald Trump campaign to its 2016 victory by roiling tensions over immigration and other hot-button political issues. But they also pushed in favor of Bernie Sanders and Jill Stein to chill election turnout and sow mistrust of democratic systems.

Our constitutional republic depends upon a common set of facts underlying its political discourse. But in the age of social media, people by the millions lock themselves into information streams based upon pre-existing narratives and assumptions. These uniform narratives are all the easier to exploit by bad actors seeking to push public opinion in one direction or another.

With much of this misinformation specifically directed by a foreign adversary, it’s our responsibility as citizens to be critical of the media we consume and share. It’s up to us to discern when an article or video is manipulating our emotions or guiding us to conclusions at the expense of vital details, nuance or alternate perspectives. The future of the country and its standing in the world may well depend on our ability to be media-literate citizens.

To that end, the East Bonner County Library District and Sandpoint Reader are hosting a series of presentations on media literacy. While the first took place this Wednesday, there are two more sessions scheduled for March 28 and April 25, each taking place 6 p.m. at the Heartwood Center, 615 Oak St. The March session will detail ethics in media, while the April session will discuss the future of media and media literacy. Come share your thoughts on media literacy or ask questions, and invite your friends to do the same.

Cameron Rasmusson is editor of the Sandpoint Reader.