A number of changes and improvements are slated for the Long Bridge and its surrounding southern roadway, with the Idaho Transportation embarking on a project announced March 3 to work on the understructure of the iconic causeway.

According to a news release from ITD, both the 40-year-old vehicle bridge and pedestrian bridge, built in 1956, are in need of joint replacement and upgrade — that is, “the parts of the bridges that allow them to expand and contract with the weather,” according to the agency. 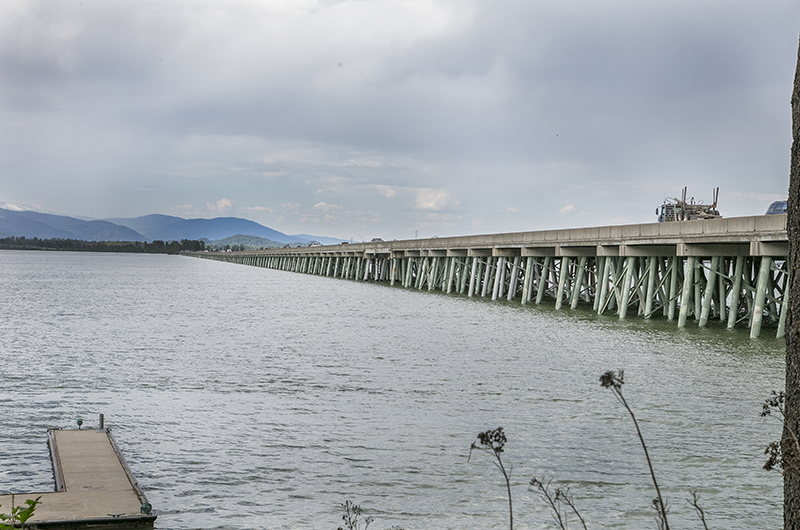 “Most of the work will take place underneath traffic as crews will be wrapping the piling that supports the vehicular bridge with a protective coating. Workers will use barges and start at the southern end of the bridge, with boat traffic restricted from entering the work zones in the water,” ITD stated.

Motorists and other bridge users will begin seeing work in June, as crews replace the joints and repair portions of the deck. No work is planned to impact the pedestrian bridge at night or on weekends. This part of the project could take up to 12 weeks to complete, according to ITD.

One lane will be closed at night beginning in late July to replace the joints and apply a protective coating to the guardrail. Officials expect that work to take a month to complete.

ITD emphasized that, “No work is allowed on either structure during weekends or city events.”

Deck repairs are not included in the work planned for the vehicle bridge, but plans to address damage caused by waves to the retaining wall for the path were added to the project earlier this year.

McMillen Jacobs Associates is the primary contractor on the $9.7 million project. They estimate that all work will be finished this fall. Learn more about the project at itdprojects.org/us95longbridge.

Meanwhile, another project is intended to make navigating the intersection of U.S. 95 and Lakeshore Drive — long a bothersome point of congestion at the southern end of the Long Bridge — safer with new traffic alignments that would allow for acceleration lanes and the ability to make U-turns.

According to transportation planners at both the state and county, the plan would call for northbound traffic off Lakeshore to be able to turn southbound before being re-rerouted via U-turn into the northbound lane — like the alignment in use on U.S. 95 in Ponderay, which currently employs U-turn lanes to speed southbound traffic.

Work on that traffic realignment is expected to last two years and begin in the summer.