Yet minimum no. of parking stalls, landscaping requirements do not meet City Code

Back in the days before COVID-19 dominated every aspect of American life, in Sandpoint, the big issue was the War Memorial Field reconstruction project, which saw the installation of artificial turf, new multi-use designations, a host of other infrastructure improvements, and retrofits of the parking and boat launch facilities.

That project is nearing its completion, with Phase IIB of reconstruction — focused on parking and boating facilities — unanimously approved by the Sandpoint City Council at its March 3 meeting to Rathdrum-based contractor LaRiviere Inc., for the sum of $1,098,737. 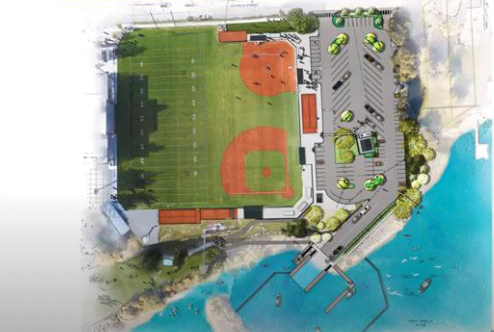 A rendering of Phase IIB of the Memorial Field improvements. Courtesy City of Sandpoint.

“I’m super excited for this phase to improve the waterfront and the boating improvements,” said Parks and Rec. Director Kim Woodruff.

City Engineer Dan Tadic told the City Council that the contract with LaRiviere stipulates that the project will increase Memorial Field parking to 73 car parking spots — up from the 40 current slots — as well as 24 boat trailer spots, up from 19.

“Those 19 are not terribly the most terribly functional,” he said. “These 24 are highly functional given the orientation of the parking spaces to the drive lanes.”

Tadic said the work will be “substantially completed” by May 27, “Which is to allow public access to the launch ramps for Memorial Day weekend, with final completion no later than June 11. So that’s just the minor remaining punch list of items.”

The boat parking spots are reserved for trailers during the high season, but during the offseason, they can double as vehicle slots — essentially turning the lot into a 151-space facility.

However, Tadic said, City Code requires 294 parking spaces for a sports venue such as has been constructed over the past year and more at Memorial Field. Beyond that, according to Code, there is a 10% landscaping requirement, translating to 22 trees and 30% tree canopy coverage at the site.

“In all of those situations we are not achieving the letter of the law here with the landscaping; we’re approximately at 8% with total number of trees; within the parking lot we’ve got nine, with canopy coverage we’ve got under 5%,” Tadic said. “For all that being said, Code, as it’s being interpreted, does not give us any consideration for these large, significant trees that are immediately adjacent to the parking lot, and of course provide an ample amount of shade; they also don’t allow us to account for all the trees that we are planting along the edge … to provide a buffer for the neighbors.”

Sandpoint City Administrator Jennifer Stapleton said it’s a matter of working with the site as it exists — not as it would be if it was being constructed from the ground up.

“If we were building something new, we would have to meet the Code,” she said. “But given our current conditions we have moved the increased parking to the maximum amount that we could for this space; also increased the amount of landscaping at that site as close as we could considering that, prior, when this was constructed we didn’t have either the minimum parking code and we didn’t have the landscaping. … There was a balance in trying to move this as close as we could to what code would require should we be building something brand new.”

Tadic added that, “[I]n terms of parking, what’s provided here is probably sufficient for 95% of the activities that would be provided at the site,” going on to describe Friday night football and The Festival as the events that the parking area would not accommodate. Yet, parking remains available on both sides of Ontario Street and the lot at the Bonner County Museum is capable of taking up after-hours overflow.

“There is other public parking within the vicinity that certainly supplements this,” he said.