Wolf traps should be placed further from trails

One of my dogs recently got caught in a wolf trap for the second time in the last few years.  The first time it was a snare around her neck, which nearly choked her to death. This time it was a double flat spring trap that caught her hind leg. While it was quite a traumatic endeavor to get her out, she completely recovered the next day. This is reassuring now but it still took many hours and several neighbors to get her out and back home. 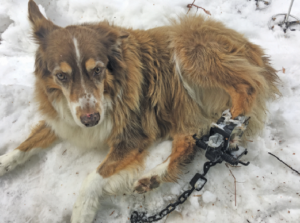 Photo by the author.

I very much appreciate the trapper, who later called to let me know that he removed the traps once he got what he wanted. However, I see several problems with this whole issue. The current Idaho Fish and Game Department rule states that traps need to be set a mere five feet from the center line of a trail – that includes any road that is not paved, like for example Sand Ridge Road which connects Grouse Creek and Elmira Road. Most trucks won’t make it up this road in winter but it is frequented by snowmobiles and, in our neck of the woods, by skiers and hikers. We live up here year round with access to all the woods and have no way of knowing when and where traps are set. Trappers may mark the area at their own discretion, but tend not to as people either steal or disturb the traps.

Though I abhor trapping any animal, I honor folks who want to make a living off the furs. I do wonder though whether there could be some etiquette to not set up traps right near frequented trails and neighborhoods where residents live year round. His suggestion was to keep my dogs on the leash. I don’t know if you have cross-country skied with two dogs, but I have a hard time with that especially in deeper snow. My dogs are trained to stay near the trail but that doesn’t keep them out of traps set right on the edge of the trail.

The IDFG is currently proposing a new rule to increase that distance to 10 feet from the edge of a trail and 300 feet from the edge of paved trails. While this is better than nothing, it does not seem enough to be safe for human and pet traffic. If this issue is of concern to you, please send comment to the Idaho House and Senate Resource Committee, which will consider this rule soon ([email protected])

And if you are a trapper please consider the neighbors you are affecting when you are putting up traps. There are vast expanses of woods here that are not regularly visited by other people in the winter.