With a boulder on my shoulder

Finding the fire for a record-breaking bike ride

I like to ride my bike uphill. But, since someone told me about an app with which you can compete against yourself or other riders who have done the same segments of trail or road, my behavior has changed a little. 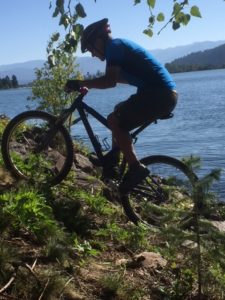 Justin Henney at work on the bicycle. Photo by Angela Henney.

I ride three times a week from my house and during each ride I have specific segments in mind that I want to improve on. Sometimes I am trying to move from second into first or from fifth into something better. Mostly I am getting therapy from the scents and scenery of Syringa Heights and Pine Street Woods, but I love going uphill as quickly as I can. The harder I push, the better chance of a powerful endorphin rush. When that happens I notice I am kinder to my family and have more patience and forgiveness for things that sometimes frustrate me.

I have been told that I am too competitive and should slow down and smell the roses more often. Recently, I was thinking about where the source of my motivation comes from and I thought of a girl from my grade-school days.

Liz Kulick was in my 5th grade class in Ridgewood, N.J. She did not disguise her dislike for such a slacker and poor reader as myself when I arrived in her class from a little farm town in Illinois. I remember her asking me — in front of the whole class — why I could barely read if I did not have dyslexia. I remember her laughing and making it all right for others to laugh at me. Although I had wicked ADD and had done very little reading as a result, prefering to shoot spit balls at friends and girls in previous grades (and getting really good at it), I started to feel stupid for the first time in my life.

Months after school started, I began breaking out with stress-related pimples and shaved them off one night in a hasty, impulsive decision. The results left me bloody, with scabs all over my face the next day. Liz Kulick had a field day with me.

I am thankful to Liz Kulick and others who joined in the ridicule. They lit a fire under me that still burns a bit today when I ride. It was also the impetus for me to go to college, where I majored in English, then go on to graduate school and an advanced degree in American Studies.

The criticisms also made me want to do my best at work or in any situation where someone might say, “Who did that?”

Related to that, last year, I was told by a bike mechanic at a local bike shop that one of my mountain bikes, a 17-year-old Klein Palomino, was no good and she should be put down and sold for parts. It was as if he were telling me the Palomino was stupid, couldn’t read and would never amount to much. Her shifting was such that only half her gears were working, the rear shock only held air for about an hour and her bushings were so bad that a mechanic told me recently she is not safe to ride.

Perfect. Like me, she is flawed and damaged. So, on my 53d birthday on Aug. 1, I drove her to within a few miles of the trailhead of Clifty in Bonners Ferry. After parking and getting the bike off the back of my car, I realized that my daughter had used the old mare last and put flat pedals on her.

“Crap!” I yelled to no one but the pines. Then I laughed. I was here to challenge the fastest times recorded by overly competitive cyclists with chips on their shoulders — like me — and I had running shoes and could not clip in. Too funny. I got on my bike and rode hard, thoroughly enjoying the 12% grade, and beat the fastest time by more than five minutes.

If I was on my other bike with bigger tires, a newer carbon frame and respect from other cyclists, I don’t think I would have had the same chip or fire. Thank you Liz Kulick and others who give me the drive to go hard and do well.