‘I call drag an act of bravery’

Queen B Drag Show brings sass and sexiness to The Hive

Queen B Drag Shows first took Sandpoint by storm in 2012 in an effort to give members of the local LGBT community a space and a night to call their own. That vision originated with drag queen Misty Boxx and drag king Corbin Thicke — a married, local drag duo who dreamed of creating that space. 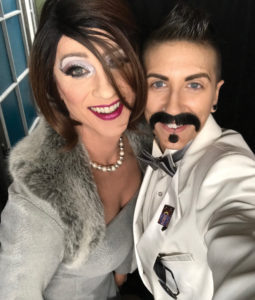 “We figured the best way to get people together is to entertain them,” Boxx said. “Once we established ourselves as drag performers, we wanted to establish that community.”

The result has been nearly a decade of Sandpoint drag shows, the latest of which is slated for Friday, Aug. 30 at The Hive 8:30 p.m.-12:30 a.m. The next Queen B Drag Show will be the group’s eighth annual Halloween show at the Sandpoint Eagles Lodge. The Reader will share more details about the event as it comes closer.

This is the first time the group will perform at The Hive — something Boxx and Thicke said they’re looking forward to.

“We’re really excited to be downtown in a really great venue,” Boxx said.

Thicke said drag is simultaneously creative and playful while also functioning as a revolutionary form of identity expression.

“I call drag an act of bravery, because we hold onto things that we may be afraid to present in our everyday lives, and drag gives people a space to try out something that they’ve been thinking about for a while, or maybe it just struck them and they are willing to jump in and try it,” Thicke said.

Boxx said taking part in drag — either as a performer or audience member — is all about leaving insecurities at the door and being entirely authentic. Sometimes “being yourself” means taking the stage as someone else.

“Drag creates an accepting environment that I think people are drawn to, and when you’re around drag performers you don’t have to worry about being the weirdest one in the room,” Boxx said with a laugh. “You can just be yourself and have fun for the night.”

That fun translates into lasting connections between attendees from Sandpoint to Spokane to Moscow and beyond, Thicke said.

“[The best part is] the energy and the bridges that are built within the community and out in the audience,” Thicke said.

Queen B shows are known for comedy and, since attendees to The Hive show must be 21 or older, Thicke said there will be a lot of sass and sexiness.

“[The Queen B drag performers are] mostly comprised of gender queer people performing a varient character on stage just for the fun of it,” Thicke said, adding that the night will include drag queens, kings and even a female burlesque performer. “There really is something for everybody.”

Ultimately, Boxx and Thicke agreed that drag culture works to break down the assumptions and barriers surrounding gender.

“As soon as you see someone you want to put them in a box,” Thicke said.

“Drag just blows all those concepts out of the water,” Boxx added.