Window shot out of Sandpoint business

The front window of The Paint Bucket in Sandpoint was shot out on last Tuesday evening, Sandpoint Police Department confirmed.

The gaping hole in the window was first discovered when store owner Harold Stephenson opened the business Wednesday morning and saw glass strewn across the sales floor. 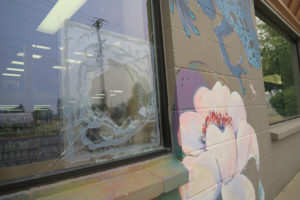 The front window at The Paint Bucket on Pine St. in Sandpoint. The hole was made from a 20-gauge shotgun blast. Photo by Ben Olson.

“First, we thought the cat had knocked something off, since we have a cat that stays in the store,” said Stephenson. “Then we saw the hole in the window.”

Stephenson called Sandpoint Police immediately. Responding officers were able to obtain wadding and pellets that confirmed the shot came from a 20-guage shotgun.

“It was small bird shot, so by the time it hit the second window, it had pretty much lost its momentum,” said Stephenson. “But there was glass blown for 40 feet.”

“No evidence leads us to believe this was targeted,” said Sandpoint Police Chief Corey Coon, who said the incident occurred in the evening sometime before Sept. 5 and 6.

Stephenson claimed that he wasn’t aware of anyone with a reason to do him or the business harm: “My best guess was that it was someone on drugs, or out celebrating. It just doesn’t seem like something a sane person would do.”

While The Paint Bucket doesn’t have security cameras, Stephenson said this incident might bring about some changes.

“We don’t have cameras but we will next week,” he said. “We talked about keeping a gun in the store, too. We’ve had people break into the back of the store, but nothing like this. We grew up in North Idaho – you never had to worry about anything like a drive-by shooting.”

Coon said the occurrence was rare for Sandpoint: “We’ve had, probably a few times a year, an accidental discharge, or they’ll be cleaning the gun or dry firing it and it will go off, causing damage,” Coon said. “But this is the first time I’ve been aware of where we’ve had a weapon discharged and suspects fled and we weren’t able to find them.”

While the broken window and clean-up are a nuisance, Stephenson is more frustrated at the unknown cause of the shooting.

“If someone is mad at us, we want to know why,” said Stephenson. “When you shoot into a building, you endanger a lot of lives.”