Is your heart a black hole?

A solitary friend and I spent a week in a cabin in Covelo, Calif., speaking of astrophysics while I was cross referencing Bill Bryson’s “A Short History Of Nearly Everything” and related National Geographic articles. Dane is a hyper-aware man with a degree in psychology. As he placed his hand over his mother’s heart when she died, he felt a concentrated swirling energy field before it expired. 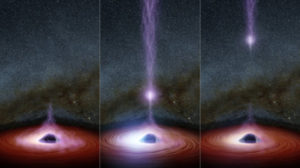 Exploring the idea that a human body is a galaxy of its own, after several hours we arrived at the conclusion that our heart is the body’s equivalent of a galaxy’s black hole.

It seemed surprisingly logical, and there was no need to confirm with each other; we felt that the issue was resolved.

The black hole at the center of each galaxy (some have more than one) is its strongest point of gravity. When any star, meteor or planet arrives at its horizon it is torn apart and swallowed in a whirl of elements. In this event, matter turns to antimatter; in effect disappearing and re-appearing from and to our perceptive spectrum.

Does that mean it’s all really gone for that meantime? I doubt it. It seems more logical that these particles move temporarily to another dimension we cannot perceive. Perhaps black holes are wormholes to other dimensions and galaxies, which would explain a lot.

From withing the black hole, a jet of gasses and particles is ejected outward. Recent studies find that the center of our galaxy is filled with extremely young stars, which defies the long-accepted theory that the center of the galaxy no longer has the materials for making new stars.

All these independent “mysteries” in my mind add up to a pretty logical interconnecting cycle. My theory is that the jets are made up of the matter from swallowed stars/planets/meteors and, after a phase of vanishing from our perception, they are recycled into new ones. I would call this “jet-recycling” and the particles seem to eventually form new stars. This recent observation of a major flare emitted from a black hole seems to encourage my theory.

Awareness of scale and the limited frequency of our perception provide us with our ultimate challenge; we will never be able to observe all.

Everything in our world — even our bodies — undergo these so called “quantum leaps” constantly. Every atom of your body is circled by electrons which leap out and back into our world of perception all the time. Where do they go? What happens while they are “away?” Is it strange to think that part of us temporarily leaves our world? Like all matter which turns to antimatter, it will come back to us. And when it does, will they bring us our feelings, dreams and imagination which seem not to be based in any reality? Do larger beings have a higher degree of consciousness than the smaller ones because they have more mass making these quantum leaps?

Returning to my initial point about the heart: It is the center of our being, though it is not in the middle. It is our strongest point of gravity. Notice how it can feel physically heavy when you feel defeated or homesick or sad? It tells you if things are OK or when it’s time to run (we call this intuition).

Name it “spirit,” “soul” or “consciousness.” I theorize that at one point it’s swallowed up completely by our heart (our black hole) where it temporarily hides from our perception, is torn apart and slowly sent back into our world as a jet of energy available for recycling (reincarnation?) by other beings. By this time it is no longer intact but has mixed with all the other non-physical energy on earth. This implies that there is a purpose to life’s wisdom, captured in each individual’s energy field. Like all matter which turns to antimatter, it will come back to us — perhaps in a clever mouse or a flower or a majestic tree. When we observe the beauty of the forest it might make us happy or thoughtful.

For this reason we should respect every atom in our lives; you never know where it has made its quantum leap to or from.