The Bonner County Board of Commissioners passed a resolution Tuesday discouraging the use of the Greenprint, a conservation planning document.

The resolution comes on the heels of the city of Sandpoint’s support for the document two weeks ago, which prompted controversy and a massive turnout at the City Council meeting. Commissioner Dan McDonald believes the resolution should address concerns that the city resolution reached beyond its territorial authority. 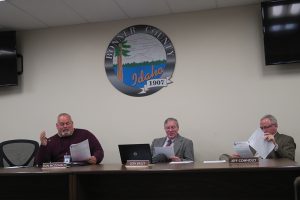 “The city felt the need to do what it felt best for the citizens of the city, while the county’s responsibility is to those in the county who felt this was a huge overreach that was not well thought-out [and] didn’t engage the affected parties of the county,” McDonald said.

A document compiled by several local organizations and public officials in cooperation with the Trust for Public Lands, the Greenprint prioritizes areas throughout the region based on their conservation value, recommending conservation easements as an option for private property owners.

At the council meeting, critics blasted the Greenprint’s data collection process, saying planners excluded more conservative opinions on land use policies. They also said the city’s support for the document stepped into the county’s jurisdiction, since data wasn’t contained to city limits. Some called the plan a part of a globalist agenda pushed by the United Nations.

Supporters, meanwhile, said that any conservation easements on private property were strictly voluntary on the part of the owner. They felt the report was a useful tool in maintaining the region’s natural beauty, which helps attract new business and tourism.

However, the county resolution warns of “unintended consequences” in selling off development rights through conservation easements. McDonald said there are stories of land owners entering into an agreement having secured permissions for cattle grazing, only for land trust groups to change terms after finding concerns of effluent running into nearby streams.

“Additionally, a little research shows that it’s common to have the easement rights sold to either the federal government or another land trust group who can choose to redefine the terms of the easement,” McDonald said.

The county resolution also backs its conclusions by stating that only 14 percent of Bonner County land is available for private development, reflecting a concern that conservation easements would limit the amount of land suitable for development. The resolution concludes that the Greenprint document will not “influence any of [the county’s] land-use  planning decisions or recommendations.”

“… The narrative that if you disagreed with this plan you were for dirty air and water was a bad play on the part of those promoting this,” McDonald said. “All they did was polarize and increase the opposition to the plan.”

Despite the city and county taking opposing stances on the Greenprint, McDonald believes it shouldn’t create any animosity between the two governing bodies. He also said the county aims to host meetings with regional municipalities to improve coordination on multi-jurisdictional issues.

“We look forward to working with all of the other jurisdictions in the county to help find commonality and solutions to the issues facing all those who reside in Bonner County,” McDonald said.

This isn’t the first time the city and county have taken diametrically opposing stances on an issue. During the debate over U.S. refugee policies in 2015 and 2016, Bonner County passed a resolution urging Gov. C.L. “Butch” Otter to oppose refugee resettlement in Idaho. In response, the city considered a resolution welcoming properly vetted refugees in Sandpoint, a proposal later squashed after a strong outcry from opponents.