Winter birding is a blast

The Friends of Scotchman Peaks Winter Birding Day began with a blast of winter weather. March 24 started out with about four inches of snow and some gusty winds. After all, the class is entitled winter birding. Just as we cannot order the birds, we cannot order up the weather either. 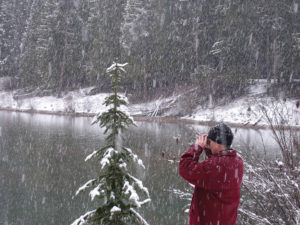 A few folks were shy to drive in the mini-storm. Another couple were unfortunately perplexed by a very common phenomenon that effects us Montana-Idaho border-living folks: time zones. PST, in Idaho, is one hour earlier than MST, across the border in Montana.  It’s a pain in the butt at times. So, our group ended up smaller than anticipated, but we do our best under the circumstances.

Dressed in wool and polar fleece, with warm caps and gloves, the hardy birders jumped out of the 4WD vehicles and slipped along a small bay overlooking the Clark Fork River in Montana. We glassed and spotted a myriad of ducks that included buffleheads, common and barrow’s goldeneyes, redheaded ducks, hooded mergansers, mallards and American widgeon. Nice weather for ducks!

A sharp-eyed gentleman caught something out of the corner of his eye crossing the road and shouted, “What the hell is that?” A beautiful pine marten loped across the access road, flashing its deep brown toned back and tail before quickly disappearing into the timber.  We studied the tracks as a raven chortled overhead and a robin flew into the brush nearby.

And then it happened. The sudden event occurred so fast it seemed an apparition. Seemingly out of nowhere, a slate gray-backed bird of prey of medium size rocketed through the sky above us, shaving the now large snowflakes with its pointed wing tips. It was tricky getting the binoculars on this bird, never mind a camera. It would vanish, then zoom overhead showing the whitish underparts, fine barring and an occasional glimpse of a dark banded tail. This dark-helmeted jet fighter like pilot tilted wings and performed attack stoops in pursuit mode before it quietly disappeared. The birders smiles were broad as we realized we had just seen a peregrine falcon.

We wandered next along the Clark Fork delta in Idaho, where birds have no inkling of time zones. In the more open water and inlets, we spotted ring neck ducks, common mergansers and bald eagles. In slower water along cottonwood stringers we identified great blue herons, belted kingfishers and an American dipper.

While hiking the mud bars adjacent to large cottonwoods, we spied the tracks of raccoon, beaver, heron and Canadian geese. In the quiet of afternoon upon arrival at our third site, the sun shined warmly as we took in red tail hawks, numerous woodpeckers and a beautiful flock of about 40 trumpeter swans.

Come join us for spring birding outings. We never know what we might find! The next one will be April 21 at North Idaho College in Sandpoint. To register: www.workforcetraining.nic.edu or call (208) 769-3333. There will also be a class April 28 in Libby, Mont., and again May 19 in Sandpoint. All spring classes sponsored by Friends of Scotchman Peaks. Email [email protected] or call (208) 265-4236 to register.