The times they are a-changin’. Two of Sandpoint’s most popular downtown bars have announced they are officially going smoke-free as of Dec. 5, 2016. Believe it or not, the reaction from the community has been mostly positive.

Both the 219 Lounge and A&P’s Bar and Grill—which sit across First Avenue from one another in downtown Sandpoint—announced the switchover earlier this week to prohibiting smoking cigarettes or e-cigarettes inside their respective establishments.

“It’s about time,” said Amanda Dexter, a Sandpoint native. “I’m so freaking excited! I love going [to the 219], but I quit [smoking] six years ago. After you quit smoking, it’s tough to be in a smoky bar.” 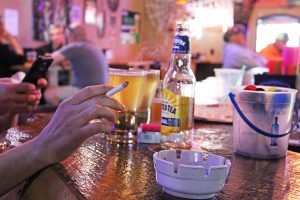 A patron at A&P’s enjoys a cigarette inside the bar. Photo by Ben Olson.

When A&P’s switched ownership last September, new owners Travis and Joel Thompson were keen on transitioning to a healthier environment while catering to a wider variety of bar patrons.

“It was their game plan right out of the gate,” said bar co-manager Lyndsy Yaw. “So many people will go out every once in awhile but hate the way the smoke smells.”

When A&P’s co-manager James Mize heard through the grapevine that the 219 was mulling over a switch to smoke-free, he said it was the perfect time for both establishments to make a positive choice for the community.

For 219 owners Mel and Claudia Dick, the switchover had been on their mind before. They introduced the idea last June to their regular customers but found most were resistant to changing their ways. Now, the second time around, there has been a more optimistic reaction to the news.

“The reactions we’ve received have been overwhelmingly positive,” said Dick. “We’re seeing on Facebook a lot of people writing: ‘Oh my god, now we have another place we can go!’”

Both bars plan to establish a smoking section outside on their respective patios; the 219 will allow smoking in a specially designated area within their beer garden and A&P’s will have a heated porch available to smokers year-round.

“It’s not going to be any different than it is at home,” said Sarah Daniels, a smoker at A&P’s. “We don’t smoke at home, we go outside. It’s not going to affect my coming here any more or less.”

Both bars said the decision stems from several factors, most importantly the health risks that secondhand smoke creates for their customers and employees.

“We don’t want our employees to work in an environment causing a harmful atmosphere with secondhand smoke,” said Dick. “Most of the staff is happy about the change, and a number of our smoking customers have said the same. In fact, one has already quit.”

Mize echoed the sentiments: “For our employees, the secondhand smoke is a major factor in this decision. I’ve worked here for 11 years and I don’t even know how many packs I’ve smoked. I don’t even smoke!”

Understandably, both bars will undergo several rounds of cleaning to rid the bars of the built-up smoke smell. A&P’s is fortunate that they are only three years inside the newly remodeled building after a fire caused major damage in 2014. They are planning to scour every surface with disinfectant and keep the smoke-eater machines going full bore until the smell has abated.

Across the street, the 219 has a much bigger task ahead of it. Clearing the room of 82 years worth of smoke will undoubtedly be a chore demanding time and effort.

“On December 4th and 5th, we will close down so we can fog the building,” said Dick. “North Idaho Flood and Fire is going to come in and spray the interior of the building with a non-toxic mist that will penetrate the brick and wood and dissipate some of that historic tobacco smell. There will be a lot of fog and smoke. It will look like the building is burning down, but don’t worry.”

If all goes according to planned, Dick will re-open on Dec. 6 in a smoke-free environment.

“After that, by summer of 2017, we’ll close down again and tear out the ceiling tiles, re-do the heating and cooling similar to how it looks above the pool room,” said Dick. “Then we’ll do another fog and mist and apply a washer and sealant on the brick and wood that will hold in the residual smells.”

At this point, after the secondary cleaning, Dick will decide on whether they will take the ceiling up to match the pool room with exposed pipes.

“It’s a multi-month project,” said Dick. “We just ask for people to bear with us through this process. I don’t want non-smokers to come in and say they still smell smoke. We’ll get there.”

For Mize and Yaw at A&P’s, who both came from food backgrounds, the switch to smoke-free will help them expand the bar’s already acclaimed menu with new choices for new customers.

“We want folks in industry to be able to come and eat here and not go back to the office smelling like smoke,” said Mize.

They plan to include some new choices on the menu like French dip sandwiches and grilled chicken quesadillas. Also, it’s important to remember that A&P’s is one of the few eateries in Sandpoint that uses 100-percent local Wood’s meat in their burgers and tacos, not to mention they are the only place in town to get a late-night meal other than a gas station.

When asked about the customers he might alienate as a result of this decision, Dick said it came down to it being the right thing to do: “This isn’t our bar, it’s their bar. Our customers. We want to promote a ‘Cheers’ environment here where everyone is welcome.”

Idaho is one of 16 states that still allow smoking inside bars. The others are Wyoming, Nevada, Alaska and all the Deep South states. As more and more states pass laws prohibiting smoking indoors, it’s only a matter of time before Idaho joins the other 34 states that have banned smoking in bars.

So, Sandpoint, smoke ‘em while you got ‘em. Come Dec. 5, it will be a brave new world on First Avenue.

And for those who just can’t sit in a bar without a cigarette, well, there’s always Roxy’s.