Where history and airsoft collide

Elias Mandela is an expert in an area where not many people can lay claim: WWII reenactments … with airsoft weaponry. 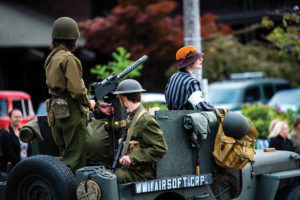 The Northwest WWII Airsoft Reenacting Corp rides in the 2018 Lost in the 50s parade. Photo by Eric Mann.

“It’s a thing that’s very hard to get people to do,” he said. “It’s a weird little niche.”

Airsoft reenactment might be an off-the-wall activity, but it’s a sport nonetheless, Mandela said. It requires physical fitness, extensive planning and a lot of care for personal safety. Mandela, 23, finds and buys all uniforms and weapons on his own, and knows how to fix everything, he said. He’s been participating in reenactments since he was a “little kid” and running wars seriously for about four years.

Everything Mandela supplies for participants — airsoft guns, uniforms, safety protection, other warfare gear — is as close to accurate as possible and entirely legal, he said.

“All of what we use is legal, and pretty intense,” he said. “It gets as close to real as you want it to get.”

Mandela said that on occasion, when the “stars align” and participants are truly invested in the history and role playing required to reenact a war, the feeling reminds him why he has invested so much time and money into airsoft reenactment.

“You get the feeling of what it was really like to be there,” he said. “You can get an idea of why some people who didn’t think they were brave were amazing heroes, and why some average people who wouldn’t hurt anybody turned into evil sons o’ bitches.”

Despite the desire for “close to real” combat, Mandela said he in no way wants to glorify war.

“We are reenacting warfare, but I don’t want anyone to think that we’re glorifying war. There is nothing good about war,” he said, adding that his passion for history is his main inspiration. “My expertise is individual history, and trying to understand the motivations of each person.”

Mandela admits that the line can appear to blur as members of the reenactment group take on roles as German and Soviet soldiers. For this reason, he attaches a disclaimer to recruitment material.

“This Corp shares no affiliations or beliefs therein with the Third Reich or with any Nazi parties. We are historical airsofters,” he wrote on a recent Facebook post. “That goes for new members as well: leave all your biases at home; this is a safe and fun place for ALL who want to reenact. If you act contrary to this, you will be removed.”

Mandela said he makes sure his purchases — particularly of German WWII materials — are from antique shops and other unbiased sources.

“If I suspect you’re a neo-Nazi, I am not going to buy stuff from you,” he said.

The individual cost to participate in a war is $20, but if you have your own uniform it’s $10, Mandela said. He said he is looking not only for combat soldiers, but also people who can drive a manual and want to operate his war-era vehicles. Participants must be 15 or older.

Those interested in joining the Northwest WWII Airsoft Reenacting Corp should visit and message the group’s Facebook page — “WWII Airsofting” — or call Mandela at (208) 610-4621.

“There are very few groups that do it the way that we do it, and I am willing to work with everyone,” he said. “I just want people to have fun.”