The future of two local Sandpoint businesses and a key downtown property is in limbo after the city of Sandpoint condemned a building located at 330 North First Ave.

The back view of the building from Sand Creek.

According to Sandpoint City Administrator Jennifer Stapleton, the city determined it was necessary to condemn the building after a month-long investigation by engineers revealed structural problems that posed an imminent risk to public safety. As a result, well-known local businesses Arlo’s Ristorante and Blue Lizard Indian Art are closing indefinitely until it’s clear whether they should remain at their existing location or find new ones. Likewise, the Dalby family, which owns the property, has a choice to either demolish the building, repair it or locate a buyer who will determine the property’s future.

“We’re scrambling around trying to find alternative spaces for both of (the businesses in the building),” said Dalby family member Marilyn Sabella. “We’re praying that they both have successful moves into good new locations.”

With the future still unclear, the building condemnation has become an emotional issue for all concerned parties. Business owners and employees find their livelihoods in flux, and a local family faces a crossroads for key piece of local real estate.

The city received concerns about the building’s safety as far back as four years ago or more. But according to Sandpoint Public Works Director Amanda Wilson, the city’s detailed investigation into the building’s safety began in early August when an engineer did a preliminary inspection. The report issued days later found significant structural issues but no immediate threat. A more in-depth investigation in late August, however, produced a more sobering prognosis.

“The result of that was there were significant concerns,” Wilson said. “Not only does it not meet code but there’s some significant risk.”

The structural defects proved serious enough that city officials determined they couldn’t responsibly leave the building open until some kind of remedial action takes place. Wilson said there’s just no telling how the building might stand up to adverse weather conditions or the winter weather just around the corner.

“The fact is we can’t say that it’s going to fall down tomorrow, but it’s at a significantly higher risk compared to other structures,” Wilson said.

The condemnation, which barred the public from the building at 5 p.m. Wednesday, comes on the heels of significant construction on Cedar Street and First Avenue. In addition, work on the city’s downtown revitalization project is slated to continue next year. Finally, Idaho Department of Environmental Quality is considering removing gas tanks, installed during the property’s previous life as a gas station, which have been mitigated for hazards but still remain on site.

With the building determined unsuitable for public use, business owners and employees are unsure what the future holds. Arlo’s owner Jesse Guscott said they are looking at possible alternative locations for the popular Italian restaurant, but at the moment, it isn’t clear where they’ll go.

Likewise, Blue Lizard co-owners Roger Disbrow and Shaun Mathis find themselves packing up merchandise without a clear idea of where the business will land.

“What bothers me the most is my staff is going to lose a job,” Disbrow said.

According to city officials, they are doing their best to work with the business owners to ease the transition while the condemnation process unfolds. But according to Disbrow, it has still been a frustrating experience. He said he was unaware of any problem until he received a certified letter on the subject in late August. However, he added that city officials have offered to lend assistance in finding a new location.

“My intent is that hopefully a space opens up that can accommodate us,” he said. 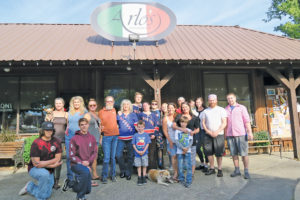 The building’s condemnation is also a difficult development for the Dalby family to absorb. The history goes back to 1949, when Dave and Marilyn Dalby moved to Sandpoint to operate a gas station located on the site. In the 1980s, the property was renovated to house businesses and establish a courtyard for a community meeting space and concert venue. The newly-renovated property came to be known as Park Place.

“They built a stage with power provided, so that free concerts could take place,” said Sabella in a prepared statement. “This helped enhance Sandpoint’s reputation as an ‘arts town.’  Over the years, many genres of music have entertained locals and visitors:  classical, Celtic, folk, bluegrass, jazz, you name it.”

As to what the future holds for the property, that is also unclear. Realtor Rapheal Barta, who is seeking a buyer for the property, said its prime location makes it an enticing option for developers across the country. Barta came on a year ago to list the property for sale, and he said at that time, the building’s structural problems weren’t evident. He said his one wish is that the owners had 60 or 90 days to find an engineering solution and provide more flexibility for the businesses.

From city officials’ perspective, however, the decision to condemn the building was not an easy one, nor was it arrived at quickly. Wilson said it has taken nearly a month for the city to go through all its procedures, during which time they were in close communication with the owners.

As for the property’s ultimate future, Barta believes it will eventually be redeveloped for new uses. To that end, he’s had conversations with several developers from the Seattle and Spokane areas. Finding a developer can be a lengthy process as it is a capital-heavy investment that takes time to bear fruit. Nevertheless, Barta is optimistic that a buyer will come through.

“I believe we will get it done, that we will find that developer,” he said.