When the going gets weird…

The weird should be watching ‘The Midnight Gospel’ on Netflix

When researchers of intellectual and social history someday assess “The Coronavirus Era,” the smart money is on them framing it as a period of mass self-assessment in the so-called global West. Lock enough beneficiaries of post-industrialism in their houses for long enough, and their consumer culture and information-addled brains are bound to come up with some weird stuff.

The Midnight Gospel should earn at least a footnote in those someday studies. 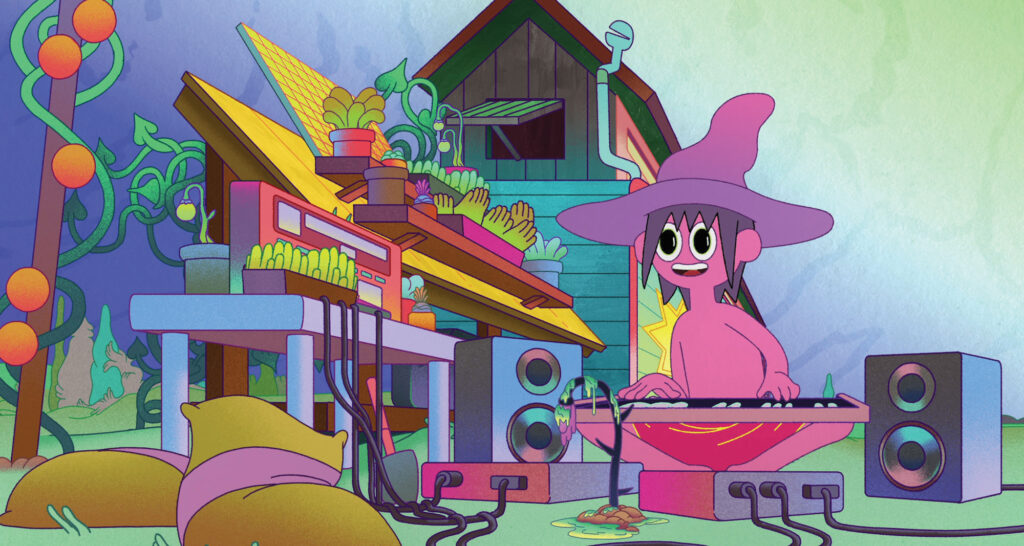 A still frame from The Midnight Gospel on Netflix. Courtesy image.

The limited Netflix adult animated series by Adventure Time creator Pendleton Ward and comedian/podcaster Duncan Trussell has apparently been in the works for years, but dropped on the mega-streaming platform on April 20 — one of those moments of cultural-historical synchronicity that feels too right to be a coincidence: Americans’ self-isolation anxiety and subsequent soul searching reached a fever pitch, then collided with their ruminations on mortality and meaning. Meanwhile, they were already sitting on the couch looking for something to watch.

Summarizing the plot, such as it is, of The Midnight Gospel feels like a fool’s errand, but here goes: Clancy, voiced by Trussell, lives a low-rent existence alone in a dilapidated trailer on a seemingly abandoned farm in “The Chromatic Ribbon” somewhere in the universe. Well, he’s not entirely alone; sharing his trailer is a dysfunctional, off-license “multiverse simulator” (voiced by Phil Hendrie) and a dog under whose mop-like hair hides a belly containing a portal to the cosmic void.

Clancy uses his bootleg simulator to skip around the multiverse to visit dying worlds and interview their denizens for his titular “spacecast” — a podcast that, as the name suggests, is disseminated throughout “space.” The individuals he meets on his journeys, which are facilitated by sticking his head into the simulator’s strongly vaginal-looking entry port, are voiced by a roster of real-life intellectuals, spiritualists, writers and gurus who take Clancy on wild adventures while expounding on profound themes of transcendence and self-knowledge.

For instance, in the first three episodes, he fights zombies alongside Dr. Drew Pinsky as they talk about drugs and consciousness; travels through a planetary meat grinder with writer Anne Lamott and Ram Dass disciple Raghu Markus, who explore the process of giving up on fearing death; and talks with real-life former death row inmate Damien Echols about Eastern Buddhist meditation and Western-style ceremonial magic as they sail across “Ass Planet” on a ship crewed by pirate cats.

Those are enough specifics; it would be a shame to reveal any more. Suffice to say, death stalks every frame of The Midnight Gospel, but not zombie death or action hero death or war death or any other kind of death you’d expect to see in our “death-obsessed” popular culture — though, paradoxically, they are all there in some form — but cosmic death. Like, real death. The death that actually does course through every living thing from the moment it is winked into existence by seed, insemination, meiosis or mitosis. It’s the death that’s so big we humans erect and inhabit structures to avoid it that are so large and elaborate, by design, that we never see them. We feel them, though, in those 3 a.m. “dark nights of the soul” in which we became suddenly, inescapably and acutely aware that we were dead for trillions of years already and will be again for trillions more.

That kind of thinking is the scaffold supporting Rick and Morty, which while also going down the interdimensional rabbit hole does so with a kind of (mostly) gleeful nihilism. The Midnight Gospel looks right into the abyss and jumps in with a sense of gratitude and wonder.

In this way, The Midnight Gospel is better than Rick and Morty. It’s also better than Adventure Time and immeasurably better than that insufferable psycho-spiritual, philosophical animated hot mess Waking Life that everyone back in 2001 seemed to think was so deep.

Part of it is the podcast-meets-cartoon format — the conversations, despite their profundity, reel out in an easy bantering style. The other achievement of The Midnight Gospel is its mind-warping artistic sensibility, which, as The LA Times described it, combines “notes of Max and Dave Fleischer’s Koko the Clown, comic artist Jim Woodring, Yellow Submarine and Hieronymus Bosch.”

In other words, it’s a big, wild, weird, squishy, sacred, profane, thinky jumble that we’re lucky exists in this particular corner of the multiverse.