SPOT officials look to the future after going independent

If a major part of growing up is moving out of the parents’ house, then SPOT just hit its stride.

The bus system, which launched in 2011 as a service managed by the city of Dover, restructured itself this year as an independent organization. For system manager Marion Johnson and board member and treasurer Clifton Warren, the transition reflects their commitment to serve a wide swath of North Idaho communities.

The big advantage now is that it’s not one city in charge of [the system],” Warren said. “We have an independent board.” 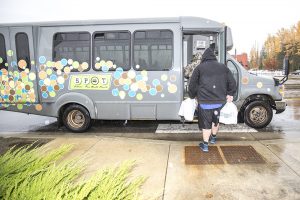 A rider boards the SPOT bus in the blowing rain on Wednesday afternoon in Sandpoint. Photo by Cameron Barnes.

It’s a big change for a service that, in its nascent planning, was envisioned as a small-scale operation for Dover residents. An agreement between Dover, Sandpoint, Ponderay and Kootenai ultimately made SPOT a true North Idaho effort right down to its name—an acronym for Selkirks-Pend Oreille Transit selected in a naming contest.

More than five years after its launch, SPOT is driving steady at an estimated 80,000 rides per year. With independence comes an opportunity to expand the service’s client base even further.

Perhaps the biggest advantage in separating SPOT from the city of Dover is the new governing structure. Where once the system was largely controlled by a single city, SPOT is now planned to be guided by a board of seven people representing each stakeholding community. All that is needed are signatures from Bonners Ferry and Bonner and Boundary counties before the arrangement is official.

The original four cities that launched SPOT—Dover, Sandpoint, Ponderay and Kootenai—still have a voice with one board member each. But soon representatives of Bonner County, Boundary County and the city of Bonners Ferry will be in the mix. The Sandpoint Area Agency on Aging and the Schweitzer homeowner association also contribute to system planning. In addition, SPOT has its own auditor and accountant while still abiding by open meeting laws.

For Johnson, the expansion of the board is key. Now that SPOT has extended its reach throughout the Panhandle, it needs governing members that bring their own unique experience, expertise and knowledge of their city or county to the table, she said.

“I think it’s made SPOT way stronger because we now have an actual board to guide our decision-making,” she added.

SPOT’s independent operation formally began in July, but it was planned far in advance. In fact, it was the centerpiece of a strategic plan developed to identify new services, goals and performance benchmarks.

Successfully reorganizing the bus system isn’t the only achievement SPOT officials marked this year. Their on-demand service to Bonners Ferry expanded in June to include Moyie Springs as well. According to Johnson, the service has proven invaluable for town residents who need to shop or attend doctor appointments in Bonner County but can’t drive themselves.

SPOT has also formed a partnership with Quest Aircraft to establish a Coeur d’Alene van pool. With many Quest employees residing south of the Sandpoint headquarters, company officials saw the value in giving them the option to save the gas and hassle of the drive.

“If you can get to and from Coeur d’Alene inexpensively, that’s a lot better than each person driving separately,” Warren said.

Other goals have yet to bear fruit. Officials of Schweitzer Mountain Resort, already a prominent partner and financial supporter of SPOT, hope to eventually cede management of their shuttling service to the bus system. The agreement would build upon SPOT’s existing winter stop at the Schweitzer Red Barn, where skiers and snowboarders connect to  resort shuttles. Under the envisioned arrangement, however, the Red Barn would be just another stop in a route traveling all the way to Schweitzer Mountain Village.

“The problem is that to fully take the system over, we need four buses, and finding funding for that is difficult,” Warren said.

Other service tweaks will likely come at the recommendation of the newly formed leadership structure. At the most recent board meeting, members approved the creation of Bonner County and Boundary County development committees. The first task for the Bonner County group, Warren said, is to reexamine the SPOT Blue Route, Warren said. Transportation authorities have previously recommended that the route add a stop at City Beach, and the committee will examine whether or not that is possible.

Meanwhile, SPOT is working with the Eureka Institute to add some much-needed amenities for riders. Thanks to a grant from the Equinox Foundation, the Eureka Institute will construct several bus shelters, bike racks and benches to help keep riders dry, comfortable and secure while they wait for their bus. What’s more, local youth will undertake the construction projects, giving them some valuable hands-on learning experiences.

It’s yet another example of the unexpected ways SPOT ripples out into the community, even for those who have never set foot on a bus. SPOT also provides a social venue for its user base. Those who ride the bus frequently get to know one another, and they appreciate the friendly service from the drivers. If a regular rider misses their usual bus, their fellow SPOT fans are even known to check in on them, Johnson said.