This is the fourth installment of an ongoing series exploring the origins of where we got some of our placenames from. Last week, we covered Newport/Oldtown, Scotchman Peak, Talache, Denton, Idaho, Cocolalla and Whiskey Jack.

This has been a great experience researching these placenames and talking with local historians. If you’d like me to investigate the origins of a placename we haven’t covered, please email me anytime: [email protected] 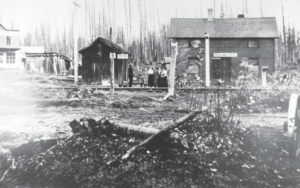 An early photograph of a street scene of early Colburn with depot and hotel. This photo was probably taken between 1901 and 1905. Courtesy Bonner County Historical Society.

Travers Park on Pine St. just west of Sandpoint is an 18-acre recreational facility first opened in 1986. The original five acres was the site of the old city dump, with 10 acres added through a land trade acquisition with the Louisiana Pacific Corporation. The remaining 2.5 acres were purchased through a private party.  The park was named for Frank Travers, who was the commissioner of baseball at Memorial Field for many years in Sandpoint, which included groundskeeping and maintenance duties. Frank was also a farmer and raised nine children, so baseball was often a break from these challenges. Frank’s daughter Therese Stevens recalled, “Dad had the infield completely reconstructed to have the perfect slopes, measurements and smoothness… no stones were left unturned or unremoved. It was like his quiet place.”

Dufort Road in Sagle connects south of Sandpoint to Priest River on the south side of the Pend Oreille River. The name Dufort was originally given to the small community south of Sandpoint, which included a general store, post office and a small railroad station by 1905. The area took its name from twin brothers Dilphus and Adolph Dufort, who lived just west of the current road on a 160-acre homestead claim that Dilphus patented in 1909. Dilphus later moved to Colorado, where he died in 1926 shortly before his fiftieth birthday.

Culver was a railroad spur that connected to a small sawmill located east of the intersection of Hickey Road and Highway 200, according to historian Nancy Foster Renk. Sandpoint Cedar Co. had a logging camp there for extracting cedar poles. When the Northern Pacific Railroad built a siding there to service both the camp and the mill, they named it Culver after Frank and Horace Culver, owners of the cedar company. The company changed names to Sandpoint Lumber and Pole Co. in 1907. The original name of this road that connected Colburn to Culver was Farm-to-Market Road, built under a federal program to connect farms to markets. The name was changed to Colburn-Culver Rd. in the late 1970s. Some old-timers still refer to Colburn-Culver Rd. as Farm-to-Market Rd.

Ellisport Bay is the main bay east of Hope where the marinas are located. When the Northern Pacific Railroad was being constructed, small sawmills were set up along the line to cut bridge timbers and other lumber. Small and Ellis ran one of these mills, first at Granite and later at Ellisport Bay just east of Hope. Ellisport Bay was most likely named after Ellis.

Westmond is a small unincorporated community about 10 miles south of Sandpoint. The name comes from George Westmon, who moved to the area in 1902 and started the Westmon Lumber Co. in 1903 after buying up 350 acres of timberland with a business partner. It was a good location for a sawmill because of the close proximity to Cocolalla Lake, which would serve as a mill pond, and the Northern Pacific Railroad for shipping finished timber. It’s not clear when exactly the “d” was added to the end of the name. Newspaper clippings refer to the area as “Westmond” as early as 1909.

Samuels is located about 11 miles east of Sandpoint around where Pack River Rd. intersects with Highway 200. The small town was originally called Iola. Iola was strategically located between the Great Northern and Spokane International railroad lines, making it a growing town. A Spokane International construction camp formed in Iola, followed by a general store, hotel and bar. The town’s name was changed to Samuels shortly after. It was named for Henry F. Samuels II, who bought 8,000 acres of land with his family in 1912. Samuels was an attorney, mine owner and businessman in Wallace before moving to the area. He later entered politics and ran for governor on the Progressive Party ticket three times, but never won. Samuels sold his share of the Success Mine in 1915, earning him over $1 million. Samuels built a 31-room mansion just east of where Samuels is located now. It was built of brick and hollow tile with reinforced concrete floors, all designed to be fireproof, according to historian Nancy Foster Renk. Despite all the safeguards, the Samuels mansion burned to the ground in 1929.

Special thanks to local historians like Nancy Foster Renk and Bob Gunter, whose work I have checked to verify my conclusions. Also, very special thanks to the Bonner Co. Historical Society and Museum for keeping history alive. Check out Renk’s book “Driving Past: Tours of Historical Sites in Bonner County, Idaho” for a treat.

Final thought: The best way to keep history alive is to donate to the Bonner Co. History Museum. Their staff and volunteers are all passionate about honoring our region’s storied history. Please consider your next charitable contribution to go toward the Museum.