Hunting for history with the Elks

The weightlessness of being carried in father’s arms.  A blast of sharp winter wind whistling through the crack of the door at his back. A glimpse of the warm, dark ceiling as father lays you in the seat of the tall, wooden chair. Mother’s crinoline rustling as she tucks the blanket under your chin. The click of her heels merging with the sweet sound of a waltz as your eyelids slowly droop.

For a few Sandpoint residents, some of their earliest memories are a sensory whirl of evenings spent nestled in one of the Grand Exalter chairs at the original Sandpoint Elks Lodge No. 1376, located in the building where Jalapeno’s restaurant now resides. 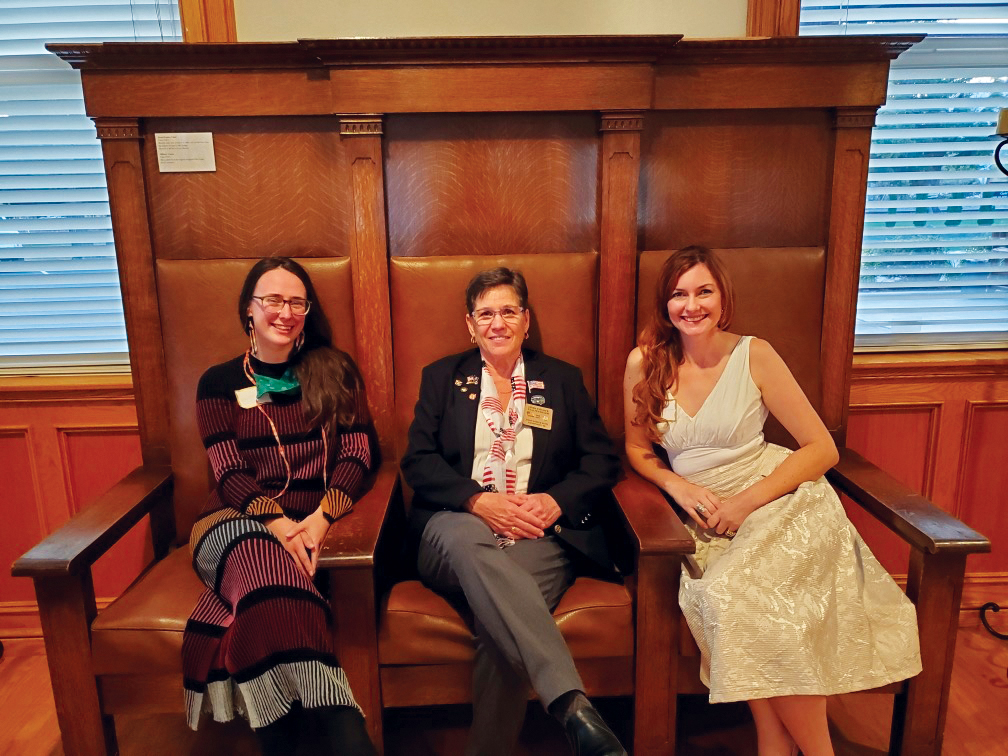 Installed for the lodge opening in 1937, the six Grand Exalted Ruler chairs vary from four to six feet tall, are made of sturdy oak and are upholstered in dark, rich material. Though not ostentatious in any way, they lend gravity and authority to whomever sits in them.  A centerpiece of the décor in the lodge, on most days the chairs served as a solemn piece of the tradition and ceremony of the Elks club.

Every now and then, the club — known as much for its social activities as for its brotherhood and community service — was transformed into a lively ballroom. A local Elk and former Sandpoint mayor, Dwight Scheffler, remembered the grand old chairs during his childhood. His Sandpoint lineage goes back to the very early 1900s, and his grandfather and father were both proud Elks. During celebratory gatherings, it was common for Elks to bring their children to the affairs, and set them up in the meeting room while they socialized in the lounge. Dwight remembers falling asleep in the chairs while his parents danced late into the night.

Sometimes an object as simple as a chair can spark beloved memories that turn into precious stories. These stories are shared between families and friends and sometimes preserved for future generations to hear. One of the most meaningful — and challenging — tasks that the Bonner County History Museum undertakes is teasing out these stories when critical pieces are missing.

The Sandpoint Elks recently celebrated their 100th anniversary at the Elks Lodge. In preparation for the centennial event, the Elks approached BCHS about creating an exhibit on the history of the Elks in Sandpoint. Digging into the history of the original lodge on Second Avenue brought back many memories from the long-timers in the club. In particular, they wondered what had ever happened to four of the six chairs that had once graced the old building. The building was sold in 1999 and the Elks Lodge moved to its property at the Sandpoint Elks Golf Course. Through the transition of time, four of the chairs seemingly disappeared.

Museum researchers set to work combing the archives for articles and artifacts from the Elks’ long local history, and in a wild burst of serendipity, discovered that the four missing chairs had been housed in the museum’s archives for years. One chair had been holding court in the museum storage for years, but without its mates, few had ever understood its import. Perhaps the most impressive piece of all, three chairs built side by side as one piece, were in off-site storage, one in (literally) a million pieces in the museum’s collection.

Curator Heather Upton said that while she had often glanced at the piece with curiosity, no exhibit she was working on had prompted her to look into its history too closely, until now. The triplet chairs stayed in storage for more than 20 years, apparently waiting for this perfect moment — the 100th anniversary — to reveal themselves.

Happily, the four ceremonial chairs came back home to the Elks Lodge just in time for the centennial event. Much of our history, and many of our most precious stories, are most richly told when they are supported by the objects and photographs that bore witness to our lives. We can’t live forever, so we can’t tell our grandchildren’s grandchildren about the exciting dances we went to or the community projects we participated in. But the objects, photos, diaries and artifacts we leave behind can tell our stories and keep them as exciting as when we lived them.

The museum curates many exhibits in spaces around town to bring these objects, and their stories, to new communities and audiences. By bringing objects like the Elks chairs out of storage and into the limelight, these stories stay relevant from generation to generation.

History comes alive in the form of buildings, stories, and significant objects and artifacts. Sandpoint is rich in history thanks to the vision of its residents past and present, and the preservation efforts of the Bonner County Historical Society and Museum. We hope the story of the chairs from the Sandpoint Elks Lodge encourages Sandpoint businesses and families to donate items and photos to the museum. Even the simplest objects help keep our history alive, link the past to the present, and remind us of why Sandpoint remains a remarkable place to call home.

Brought to you by the Bonner County Historical Society. Research provided by Chris Corpus, Heather Upton and Dan Evans. Special thanks to Dwight Scheffler for participating in BCHS’s oral history program. To share your story and artifacts with the museum, make an appointment by calling 208-263-2344.