A daughter of both Alaska and nationally renowned fiber artist Jill Choate, Lucht wove her first basket at 10 years old. Now, living off-grid at a Rapid Lightning homestead with her husband and three young sons, Lucht likes to say her family business makes “bike baskets and boys.” Cool Bike Baskets took off about five years ago when Lucht decided she wanted to spend more time at home with those boys. 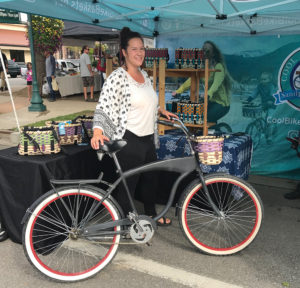 It takes Lucht about two hours to weave one of her, what she calls, “modern-day burden baskets.” She uses rattan reeds, which her mother taught her to dye different colors, and incorporates a design called a Cherokee wheel in each basket. Lucht, whose father is a Cherokee native, said the wheels were created by Cherokee women to differentiate their baskets from the baskets of white women.

The result of Lucht’s various influences is a visually appealing product that is utilitarian at its core.

“I wanted them to be pretty, beautiful, but also know that these are to work with,” Lucht said. “They are to be used.”

The baskets have short straps for attaching directly to bike handles, but also long straps for toting over the shoulder. Lucht said that versatility was born from a need she witnessed herself. Bikers would stow belongings in attached wire frame baskets, then — in what Lucht called an “awkward shuffle” — they would have to load all those belongings into a separate tote before leaving the bike behind.

“I thought, ‘that sucks.’ What if you could just have [a tote] on the bike, and then just click it off and go?” she said.

This season has been Lucht’s busiest yet, thanks to it being her first year at both the Saturday Sandpoint Market and the Wednesday market in downtown Coeur d’Alene. She said she underestimated how many baskets she’d need to sell at both locations all summer.

Though Lucht has built a style and market all her own with Cool Bike Baskets, she said she never forgets the origins of her art.

“Every time I weave it’s a ‘thank-you’ to the grandmothers,” she said.

Find Lucht and her creations at the Sandpoint Farmers’ Market Saturdays 9 a.m.-1 p.m., the Coeur d’Alene market Wednesdays 4-6:30 p.m. or online at coolbikebaskets.net.