What would Mister Rogers do?

Nostalgia, empathy and the power of friendship make for ‘A Beautiful Day in the Neighborhood’

Fred Rogers — or, as he was known for more than 30 years on his PBS show, Mister Rogers — remains a guiding light for people who grew up during his reign over children’s television, whether they consciously recognize it or not.

Rogers, a minister-turned- TV-personality, was a radical in an unassuming red cardigan, leaving behind a legacy of treating his young viewers as equals with complicated feelings and unbounded aspirations. It’s no wonder that A Beautiful Day in the Neighborhood, a 2019 film about the man and his poignant kindness, would strike exactly the right note amid the cruelties of the present day. 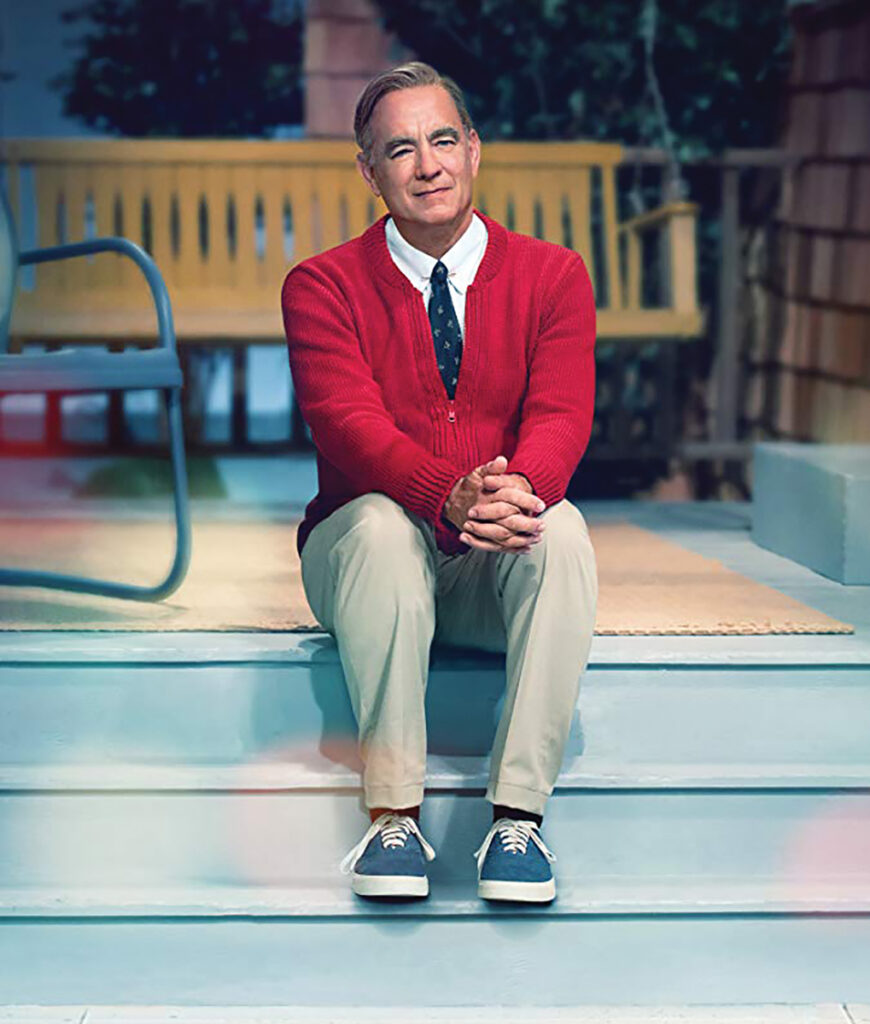 The story is based on a 1998 Esquire article by journalist Tom Junod, who wrote a profile of Rogers as part of a series on heroes. While names are fictionalized (the Junod character in the movie is named Paul Vogel) and main plot drivers are different (Vogel is struggling to reconcile his relationship with his alcoholic father), the message remains the same: Rogers wasn’t pretending to be anyone while on screen, just using his platform to teach kids that big feelings are OK. As Beautiful Day makes abundantly clear, those lessons were not limited to television, or even to children.

By utilizing miniature townscapes and upbeat piano tunes, director Marielle Heller makes Beautiful Day feel like a story within an episode of Mister Rogers’ Neighborhood, and the nostalgia that results is genius.

Some question the decision to cast Tom Hanks as Rogers, with The New York Times going so far as to argue that the character felt “miscast” at times due to the seeming conflict of Hanks’ naturally outgoing persona set against Rogers’ docile introvertedness. The opposite feels true — Hanks is a veteran of his craft, using his incredible ability to slip into someone else’s mannerisms and idiosyncrasies with ease. If anything, the beef should be that Mister Rogers couldn’t still be around to play himself; after all, can he really be replaced? No, but Hanks had the verve and talent to do it, and the result is every warm-fuzzy possible without watching Neighborhood reruns.

The chemistry between Hanks and Matthew Rhys, who plays Vogel, propels the film in a way typically only possible with drama and action. The tension in early scenes — Vogel skeptical of Rogers’ sincerity, but Rogers inevitably able to make Vogel feel as though he is the most important person in the world in that moment — creates a relationship that would seem far-fetched, had most American children not already felt that connection through their television sets. Rogers shared the same fears and frustrations as his viewers, and gave kids the tools to face big issues like race, war, anger and grief. He does the same with a salty journalist in Beautiful Day, only this time, the lesson is forgiveness.

The film sees very few bumps in the road, though it does come to a slightly jarring climax. Vogel experiences what can only be described as a psychotic breakdown when a health emergency lands his father in the hospital, and it forces Vogel to confront the complicated feelings he has toward the man. He seeks out Rogers — the most stable and understanding person currently in his life — and on his panicked, midnight quest to Pittsburgh, Vogel’s consciousness devolves into imaginative chaos, complete with childhood flashbacks and unnerving piano music.

I understand the purpose that such an extreme change of tone serves in the film, but still, it didn’t feel quite right. Luckily, Vogel wakes up from his tumultuous episode to find himself in the Rogers’ home, witnessing Rogers and his wife Joanne playing beautiful piano music side by side. It is then that the real appeal of the film — Mister Rogers’ comforting quirks and all we can learn from them — quickly retakes the reins.

The conclusion of the film focuses on honesty and peace, so get the tissues ready. Vogel is about to become a new man, and the final sequences paying tribute to Rogers — complete with scenes of him swimming laps, praying for individual people and sitting alone at a piano as his studio goes dark — do all they can to pluck at the viewer’s already-taut heartstrings.

A review of the film from rogerebert.com frames Beautiful Day as “a companion piece” to the 2018 documentary Won’t You Be My Neighbor?, which utilized interviews with Joanne Rogers and many people who worked with the man to paint a complete picture of Rogers himself. That observation is absolutely correct — Beautiful Day does wonders in further preserving his legacy, this time not by attempting to understand the man behind Daniel Tiger, but by reflecting some of the countless lessons he was able to teach during an incredible lifetime.

Mister Rogers did not shy away from hard things, and neither should we. With imagination, empathy and grace, people can go a long way in understanding one another.

Watch A Beautiful Day in the Neighborhood on Amazon Prime Video, Hulu or a number of other streaming services. Also find it on DVD at the library.

Tags: A beautiful day in the neighborhoodwhat would mr. rogers do