A lot of questions go through your mind when a strange woman is about to spit wine in your face. Chief among them: Why did I agree to this? And the answer is peer pressure. 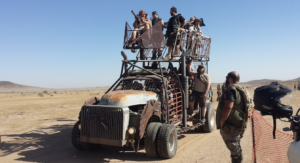 My friends were committed to joining the Cult of Catmeat, one of the many tribes that comprise the social backbone of the four-day post-apocalyptic Wasteland Weekend festival, hosted each September since 2010 in the desert outside California City, Calif.

To join the Cult of Catmeat, you must agree to be baptized. By wine. Expelled from the mouth of its ranking member. It’s no light spritz of merlot, either. My friends had just undergone the ceremony and came out looking like Carrie after prom night. The volume and velocity of Catmeat baptismal wine is best described as torrential.

There’s a reason why so many Wastelanders subject themselves to the ordeal (I happened to be the 100th Catmeat inductee and won a special patch for my luck). The cult formed when its founding member rescued a stray cat from the California desert where Wasteland Weekend takes place. In that sense, the Cult of Catmeat is illustrative of Wasteland Weekend as a whole — it’s an experiment in community building constructed through a whole lot of weirdness.

Wasteland Weekend takes its most direct inspiration from the Mad Max movie franchise conceived by visionary action director George Miller and ranging from 1979’s Mad Max to 2015’s Mad Max: Fury Road. Peripheral influences come from other iconic post-apocalyptic franchises — for instance, the festival’s unofficial bottle cap currency system lifted from the “Fallout” video games. To reinforce that sense of immersion, costumes are mandatory. Try to access the City — where the majority of events, live music and the most colorful camps are located — in plainclothes and risk being turned away by the guards.

It’s like four days of Halloween, with bartering for supplies or collectibles replacing the search for candy.

My first full day of Wasteland Weekend was spent in an uncaffeinated slump for want of coffee. It was just my luck, then, that I came across the Caffiends, a Wasteland tribe that brews up vats of coffee every morning. To enter the Caffiends’ good graces and gain access to their coffee, I offered fair trades: first, one of the bottle caps from my tribe, the Cult of the Cup and, second, a lucky kazoo I had salvaged days earlier.

Collectibles are a major part of the Wasteland Weekend experience, and bartering for new, unique bits of swag is a point of pride for longtime participants. Many integrate the bottle caps, patches, dog tags and other valuables into their costume, creating an evolving visual history of their Wasteland exploits. They aren’t just bits of painted or printed cloth and metal — they’re treasures to be shown off on the festival Facebook group after the fact.

And they’re treasures with real value during the festival. One of the most surprising things about Wasteland Weekend, now in its 10th year, is its resistance to commercialization. There are almost no opportunities to spend real-world money, with only the official Wasteland Weekend merchandise store, the independent retailers of Barter Town and the precious few food vendors charging for goods or services. Even the booze, typically a cash cow for any festival, is free. The Atomic Cafe in the city is stocked entirely with donated alcohol, and its surly bartenders will mix up any simple drink upon request.

There’s no shortage of activities to keep you busy at Wasteland Weekend. The evenings are flush with live music, particularly of the industrial, electronica and metal genres. The Thunderdome is a spectacle unlike any other, where combatants clash together while affixed to bungee cords and armed with padded sticks. Various classes, special activities and events — like bounty hunting for attendees who have had a hit put out on them — are available throughout the day.

Perhaps my favorite diversion was a theater showcasing heavily degraded VHS tapes. The curators of this primo schlock encouraged the audience to wisecrack during screenings like liquored-up cast members of Mystery Science Theater 3000.

Ultimately, the people make up the key appeal of Wasteland Weekend. This is a festival where you’re more likely to be greeted with an upturned middle finger or a four-letter word than a simple “hello.” But underlying the entire festival is a spirit of kinship and cooperation. Race, gender, political identification, sexual orientation and every other dividing line fade into the background. All that’s left is immersion in a society constructed from salvaged metal and rubbish.

I don’t know if I’ll be able to return to the Wasteland, although I’d like to. If all goes according to plan, I’ll be back in school next year and the festival takes place during important early days of the fall semester. Regardless, the experience stands out as entirely unique and unforgettable. After all, I am the 100th member of the Cult of Catmeat, and no matter what happens, no one can take that away from me.