Marshall Charloff and The Purple Xperience brings Prince to Sandpoint

It’s one thing to admire the musical oeuvre and sartorial style of iconic pop-rocker Prince, and another thing entirely to imitate him. Many have tried, and the sonic graveyard is littered with karaoke poseurs who dared approach the unapproachable. 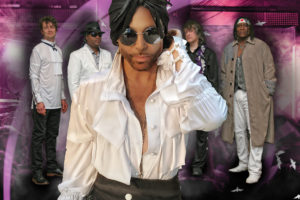 Rarest of all is the ability to step into Prince’s shoes — 3,000 pairs of custom-made high heels, women’s size 5 1/2 or 6, according to Vogue — but that’s exactly what Marshall Charloff and The Purple Xperience have managed to do.

The five-piece band has all the necessary bona fides: frontman Charloff was discovered by Pepe Willie, who was also instrumental in putting Prince on the road to superstardom; played keyboards and bass with Prince on lead vocals for the album 94 East; and performed with Willie and The Revolution alum Doctor Fink at a Rock and Roll Hall of Fame benefit concert. The band even hails from Prince’s birthplace of Minneapolis, Minn.

Sadly, no one will ever experience a live Prince show again, as the artist died in April 2016 at the age of 57. Sandpoint, however, will have the chance to “xperience” something damn close on Friday, Nov. 1 with a post-Halloween Halloween bash featuring Marshall Charloff and The Purple Xperience at The Hive, 207 N. First Ave. Doors open at 7:30 p.m. and the show starts at 9 p.m.

“We offer a suspension of belief; it’s like being transported,” Charloff told FlipSidePA in 2016, only five months after Prince’s death.

In the interview, Charloff said that while The Purple Xperience began touring in 2011, its shows had become more meaningful as they became tributes in more ways than one. “In the song ‘1999,’ Prince talks about how our time here is limited and that tomorrow isn’t promised,” he said.

What is promised is that audiences at The Hive will enjoy a visual and musical spectacle, as Charloff expertly takes on the stage mannerisms, fashion and vocal style of the master himself. The crowd will be a spectacle, as well, with a costume contest for cash and prizes in categories including best overall, scariest and best couple or group costumes.