Editor’s Note: In this first installment of an ongoing series, we are spotlighting area volunteers who have given back to this community and may not receive the recognition they deserve. A member of the community recommended every volunteer spotlighted in this section. Know someone you’d like to recommend? Send their name and contact information to [email protected] and why you are nominating them.

Usually, retirement means slowing down, focusing on hobbies, relaxing. Somehow, I don’t think Judy and Chris Thompson got the memo.

Instead of slowing down, this dynamic Sandpoint couple have made it their mission to give back to the community they love. For this reason, we’ve singled them out as the subjects of our volunteer spotlight this week. 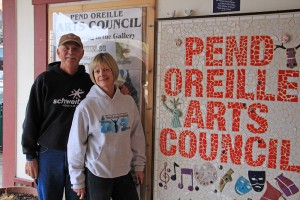 Chris and Judy Thompson photographed by Ben Olson outside of the POAC Gallery.

“I have had the pleasure of working with Judy on several committees,” said Nicole French, owner of Petal Talk, who nominated the couple. “Her dedication is just outstanding. She’s one of those ‘go big or go home’ people with all the different committees she sits on and volunteers with. A person who donates that much to their community in their retirement just blows me away.”

When contacted for an interview, Judy was quick to point out that she was part of a team with her husband Chris, who also spends a lot of his spare time volunteering.

Judy and Chris Thompson first met at North Idaho Junior College. After they graduated from University of Idaho, they wanted to spend a year skiing before Chris planned to get a job at a bank. That never happened. Chris began working in the skiing industry, eventually working for the regional and national Volunteer Instructor’s Association. Judy found a job at “a small start-up in Redmond, Washington,” (Microsoft). The two retired and moved to Sandpoint in 1998.

“I spent that first winter skiing every day,” said Judy. “It wasn’t long before I had to find something to do.”

Judy began to volunteer, getting involved with several worthy organizations such as the Community Assistance League and Pend Oreille Arts Council.

In her time in Sandpoint, Judy has put her hand to just about every worthy organization in town. She was on the Chamber board for three years, volunteered on the regional committee for the Scenic Half, volunteered for the Food Bank, was a board member and planner of the Bay Trail Run for the Friends of the Pend d’Oreille Bay Trail and has helped with Kinderhaven.

“I have to be busy,” she said. “We both like physical activity events. I may have been on the Scenic Half Committee until this year, but Chris was the one who measured and marked the route, set up the course race day and helped with set up and taken down, as well as putting out ‘fires’ on the course. Couldn’t do any of it without the guy with the pickup!”

The Thompsons have also volunteered for the Race Across America, driving a support van for Team Laughing Dog’s bicycle riders.

“It was a great way to see the country—at 15 miles an hour,” said Judy.

In addition to her other activities, Judy is also a member of a running group called the Midweek Milers.

“We get together every Wednesday, run three to five miles, then go out and have some wine and beer,” said Judy.

Chris credits his mother Helen Thompson as his role model for volunteerism. His family first moved to Sandpoint in 1957, and the Thompsons still own the family farm on Wrenco Loop Road to this day.

“My mother was a real role model for how to get involved with your community,” said Chris.

He has worked a lot of different jobs—on the pipeline in Alaska, at the Spokane Expo in 1974—but he first got his start in the skiing industry in 1963 at a very young Schweitzer Mountain Resort.

“I was a junior in high school when I went to work for Jim Parsons, Jr. in the rental shop,” said Chris. “I started with wooden skis. The general manager offered ski lessons to the high schoolers in town. There were a lot of high school kids who had the time to work there.”

An avid skier all of his life, Chris still volunteers for organizations like Schweitzer Alpine Racing School (SARS).

“It’s important for the ski industry to give back through education,” said Chris. “You don’t become sound without trainers. It just makes common sense to give back to the community.”

When asked what organizations could use more help in town, Judy was quick to point out the Bonner County Food Center.

“I’ve spent some time out there stocking shelves,” said Judy. “There’s a lot of need there. Food is a basic need. We all need it. People need help, especially during the holidays. They could always use a lot more baby products. You can go without coffee, but you need things like diapers.”

Judy’s volunteer philosophy was also influenced by her mother.

“My mom is my role model,” she said. “She has volunteered forever. She was always taking food to the Food Bank from her garden.”

Are you interested in volunteering around town? According to Judy, it’s easier than you think.

“Just do it,” she said. “Find what you like and see how you can help.”