Utara After Hours: The Wildcrafters

When it comes to the Wildcrafters, the band’s name couldn’t be more accurate. Hilary Petterson and her sister Chloey Davis crossed paths with future bandmate Josh Walters thanks to a common interest in creating with materials found in nature — also known as “wildcrafting.” 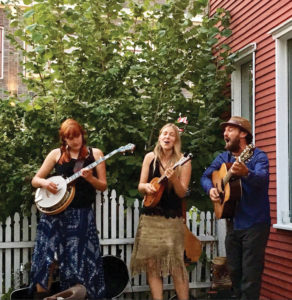 The trio first connected at a primitive skills gathering, and ended up playing together around the campfire.

“It’s about being connected to the land, being self-sufficient, getting our sustenance from nature,” Petterson said of wildcrafting. “That’s where a lot of our music comes from — nature connections and just getting outdoors.”

While Petterson and Davis grew up playing mountain music in their family band, Walters became the final piece to their current project. Though the Wildcrafters haven’t played shows consistently for about a year, Petterson said they’re excited to jump back into things with a number of local gigs including an After Hours show at Utara Brewing Saturday and an appearance at SummerFest 2019, an annual music festival in Sagle happening July 12-14.

Petterson described the trio’s sound as “folk fusion,” combining elements of traditional string-band bluegrass, old-time style and singer-songwriter folk set to lyrics largely about their love for building a lifestyle in the mountains.

“A lot of that old mountain music is so connected with place,” Petterson said. “A lot of what we write about is our connection to the land … It just seamlessly flows into that because it’s part of our hearts.”

Petterson and Walters alternate between playing the guitar and mandolin while Davis is a seasoned banjo player with a degree in bluegrass and old-time music and having once been crowned the Arizona State Banjo Champion. Petterson said the Wildcrafters also recently acquired a stand-up bass player, rounding out a band whose shows Petterson called “foot-stompin’ fun.” She said some of the Wildcrafters’ tunes are more soulful, while others feel like “sitting on a back porch barefoot on a hot summer night.”

“If even just one song touches one person, that’s magic for us,” she said. “We write these songs from our heart and want people to have a good time and connect.”

Utara Brewer David Kosiba said all live music at the brewery is “After Hours” in an effort to separate a regular visit from the intention to take in a live show. In Kosiba’s words, “You always get what you expect.”

“No closures for private parties. No getting asked to leave or pay a cover during normal business hours. No having to shout over the band playing in the corner that you didn’t come for,” Kosiba said. “Not saying there’s anything wrong with any of those things, they are pretty commonplace actually. We just wanted to do something different.”

Kosiba said all proceeds from After Hours shows go to the band and its promoters.

“Utara wants to do what we do best — serve beer and provide a warm and welcome place to do so,” he said, adding that all the music heard at After Hours shows is original. “We’re very in to supporting original artists and providing them a venue to augment their efforts.”

The Wildcrafters will play Utara’s After Hours series at 9 p.m. Saturday, June 29. Tickets are $10 and can be purchased at utaraidaho.com or at the brewery.