When it comes to that “high, lonesome” sound from Colorado, there are few bands who have a closer following than Yonder Mountain String Band. 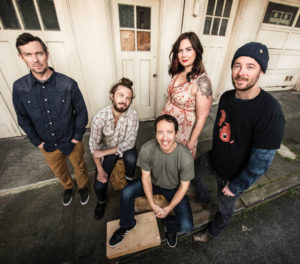 The progressive bluegrass band first formed in Nederland, Colorado in the late 1990s and quickly built a loyal following based on their high energy live shows, their accessible studio albums and their fun stage presence.

We caught up with bassist Ben Kaufman and asked him about their upcoming show at the Hive on Jan. 18.

SANDPOINT READER: Thanks for your time. I first saw Yonder Mountain String Band while I was going to school in Fort Collins in 1999 or 2000. It was at a little club in Denver I forget the name of and there were probably 50 to 60 people in the crowd, dancing like fools. Great show. Flash forward nearly 20 years later, after entertaining so many people, what helps you keep the magic going?

BEN KAUFMAN: Looking at it in an external way, it’s very easy to have a good time playing music when you’re lucky enough to have great people showing up to see the show. Looking at it from a more internal perspective, having new material to perform (whether that’s an original song or a fun cover) definitely helps keep it interesting.

SR: One thing I’ve always enjoyed about YMSB is that the songs are written by different songwriters, and often different members will lead them. Can you share a bit about what it’s like to create in a shared format like this? Do any of you play particular roles?

BK: It wasn’t really pre-planned in any way. It just was the case that we each had a desire to write music and to attempt to express something of our own experience through songs. The further along we get, the more collaboration there is in the songwriting process. There aren’t any specific roles we fill, but Dave Johnston, our banjoist, is definitely a great resource for help with lyrics. And Adam Aijala, our guitarist, can beatbox pretty well. Although that’s not as useful in a bluegrass band as you might think.

SR: Can you share what influence Colorado as a place has had on your music? Why do you think that particular location has incubated such an amazing variety of bluegrass?

BK: That’s a great question. It seems to me that the Front Range of Colorado has always drawn independent people. That desire for space and personal freedom certainly translates to the music that is created there. There is a strong counter-culture in Colorado and from that you get an audience that is receptive. I think it’s a slight oversimplification to say that “hippies like progressive bluegrass,” but at the same time it’s not too far off the mark.

SR: Allie Kral and Jake Joliff joined YMSB a few years back on the fiddle and mandolin. What kind of influence have they had on your sound?

BK: Well, Jake is one of the most talented mandolinists to pick up the instrument in my opinion. He’s just on a different level. And Allie has this X-factor. She is a very naturally dynamic player and personality. Both are incredibly gifted in their own ways, and it’s certainly a pleasure to make music with them.

SR: You have played with some of the greatest pickers that have stood on stage in your careers. Any highlights from experiences with some of your own heroes that you’d like to share?

BK: At the Telluride Bluegrass festival we got Sam Bush to play cowbell on “Don’t Fear the Reaper.” I’m not sure there’s anything else left to accomplish after that.

SR: Your latest studio release, “Love. Ain’t Love” was well-received by fans and critics. Do you enjoy recording in the studio as much as playing live shows, or are they hard to compare? Anything new you all are working on?

BK: The studio is a totally different experience from the live show. The ways you experiment are different. One happens in real time and the other gives you the opportunity to step out of time and get very focused on small details. We have three projects we’re focusing on that will likely be EPs. One is new original music, one is recordings of older material that for whatever reason never made it onto a record, and one is punk rock covers with an original song called “You Can’t Shit Your Pants if You’re Wearing A Dress” (not the Celine Dion song).

SR: YMSB spends a lot of time touring, and you’ve got some of the most dedicated fans spread out all over the country. Care to share a fun moment from the road that they would enjoy?

BK: Somewhere along the way we made up a drink called a Left Turn, which is Tuaca and pineapple juice. We got to drink them with Dale Earnhardt Jr. once.

SR: This will be your fourth show in Sandpoint at the Hive. What are your thoughts on the venue?

BK: It’s a fantastic place to play music and obviously put together and run by people who care about what they’re doing.

Check out Yonder Mountain String Band at the Hive on Friday, Jan. 18. The doors open at 7 p.m. and the show starts at 8 p.m. Tickets are available in advance for $25 at Eichardt’s Pub and Pucci’s Pub.