Vietnam: A land of mystery, amazing food and a lot of noise

Editor’s note: Vietnam is a wild, mysterious, loud, adventurous place. It’s a nation teeming with life and the perfect travel destination for backpackers and foodies looking for adventure without breaking the bank. However, it’s impossible to do this magical place justice with one article, so I’ve chosen to focus the attention of this piece on culinary delights alone. If you are interested in learning more about the history, politics and natural beauty of Vietnam, I encourage you to read more, or even better, plan a trip of your own.- 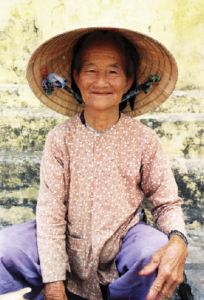 A beautiful older women selling trinkets in Hoi An, in the central part of Vietnam

In Vietnam, everything is about balance.

A Vietnamese dish isn’t just about throwing ingredients together, it’s about the full culinary experience. Aromatic herbs stimulate the nose, colorful ingredients appeal to the eyes, crisp greens and vegetables create enticing sounds, spices greet the tongue with a rush of emotion. A hot item is often paired with a  cold item, a sour with a sweet. It is this yin-yang style of cuisine that makes this country one of the best for foodies in the world.

It was a stroke of luck that brought Cadie and I to Vietnam in the first place. Searching for cheap airfare, we stumbled across round trip tickets to Ho Chi Minh City (HCMC, formerly called Saigon) for only $600 and booked a month of travel by backpack in the spring of 2017.

Upon landing in HCMC, the culture shock was immediate. The first thing that hits you is the heat, then the noise. The preferred method of travel in Vietnam is the motorbike or scooter. Standing at a streetcorner in HCMC for the first time, the spectacle of thousands of sputtering two-cycle scooters whizzing by is jaw-dropping.

In a word, traffic in Vietnam is utterly chaotic. Or so it seems. Bikes zip in and out of traffic, up on sidewalks, along parking lanes. Buses clamor by confidently aware that everyone will get out of their way. But there is an order to the maelstrom of activity. Somehow it works.

Walking across a busy street is an act of utter faith. The trick is, don’t think about it. Pedestrians don’t wait for traffic signals or use crosswalks, they just start walking out into the street. The traffic adjusts accordingly. Some bikes miss by mere inches, but I never saw any accidents. The only thing that throws a monkey wrench in this equation is if the pedestrian is eratic or hesitant and makes sudden moves, which throws the whole matrix into a tizzy.

Once you’ve navigated a few streets and have gained color back in your face, it’s time to find something to eat. The first dish we had in HCMC was, of course, a bowl of phó. Phó is a staple in Vietnam, and one of my favorite dishes. It’s a hearty noodle soup that most Vietnamese eat for breakfast. You can find it anywhere in the country, mostly from street vendors for anywhere from 30 cents to $2 per bowl. The broth is made from extended boiling of meat and spices. Phó is typically served in a large bowl with vermicelli noodles, spring onions, bean sprouts, herbs, slices of tofu or beef, broth and is accompanied by a huge side of greens and vegetables, peppers and sauces. You grab the noodles with chopsticks in one hand and slurp broth from a spoon with the other hand. Delicious.

Another staple in Vietnam is the bánh mi sandwich. After a long colonial rule in Vietnam, France’s legacy is preserved in the country with breads and pastries. In a bánh mi, a French baguette is traditionally filled with pate, mayonnaise, cold cuts, jalapeños, pickled vegetables and cucumber slices. Sometimes grilled meats are used instead of cold cuts. Like phó, you can find bánh mi anywhere for under $1. Great drunk food. 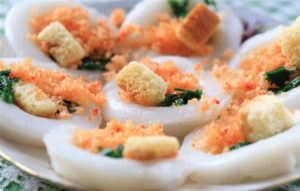 While cities like HCMC offer a great sampling of street food, to enjoy fresh seafood it’s always best to check out a beach town. We stayed in Vung Tao, just south of HCMC and ended up visiting Sandpoint native Greg Vanderford, who lives in Vietnam with his wife and kids. Greg showed us around and we ended up at an outdoor cafeteria style seafood joint. Everyone at the tables was Vietnamese. This is a good thing.

We left the ordering to Greg’s wife Tuyen, who is Vietnamese. What came was a feast of the freshest seafood I’ve ever eaten: three different kinds of snails, octopus, squid, crabs, clams and some items I honestly still can’t identify, but were delicious. This feast would’ve cost a couple hundred dollars or more in the States, but I think our bill was somewhere around $30. 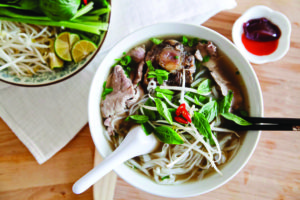 As we moved further north through Vietnam, we found the cuisine didn’t change drastically, but it specialized. In Da Lat, a mountainous inland city where it was cool at night and warm during the day, I had one of my favorite dishes: Bun Thit Nuong. They start with cold rice-vermicelli noodles and top with grilled pork, fresh herbs and salad, bean sprouts and spring rolls, using Nuoc Cham (sweet fish sauce) as the “dressing” and topped everything with peanuts, pickled carrots, and a piece of grilled pork sausage. The combination of the cold noodles and hot grilled pork is amazing. You can actually find a dish very similar to this at Beet & Basil in Sandpoint called the “vermicelli noodle bowl.”

In Hue, the ancient imperial capital of Vietnam, we toured the imperial city and saw evidence of the shelling this palace took during the Vietnam War. Afterward, we were told to try the Banh Beo, or rice cakes and found a place that specialized in them. 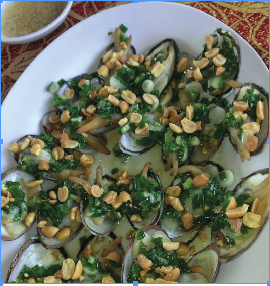 It’s hard to explain Banh Beo. They’re about the size of a sand dollar, and come in their own little shallow dish. They are made from rice flour and tapioca flour, which is combined to form a paste that is steamed into a consistency much like a fried egg. Then they are topped with dried shrimp, or crispy pork skins, or scallion oil, or any number of other ingredients. The first bite was weird – like eating a gelatinous booger. Then you taste the flavors and the texture ceases to be an issue. Most locals ate the cakes with a chopstick nudging the cake off the circular dish and slurping it with a dash of fish sauce on top.

The absolute best dish I had in Vietnam came in Ha Noi at an unassuming eatery near the backpacker quarter. The dish is called Bun Bo Nam Bo. While this is considered a “southern Vietnam” dish, we didn’t find it anywhere in the south, but only in Ha Noi.

Bun Bo Nam Bo is another vermicelli noodle bowl served with grilled beef, as well as the normal fresh vegetables, pickled carrots and papaya. Topped with peanuts and sprouts, this dish doesn’t sound different than the other noodle bowls, but the flavors are enough to make you sit back in your chair and sigh. Cadie and I ate this same dish at this same eatery a dozen times. If you ever see it listed at a Vietnamese restaurant, try it. It can also be called “southern beef noodle.” 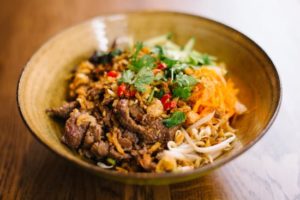 Of the many meals we had in Vietnam, there were only a couple that were sub-par. One was truly awful. While waiting for our night train from the beachside town of Nha Trang, Cadie and I asked the server to bring whatever she liked best (in broken Vietnamese, of course). What arrived looked like something a pig with a chest cold shot out of its snout. There were rubbery bits of meat that appeared to be pieces of vertebra. There were tentacles. There were hard pieces that we found later were pig’s ear. The only way we could get it down was to keep washing down Saigon beer after Saigon beer.

By the time we left, we both had a great buzz on. We walked across town and stumbled into a pool house where all the tables were playing a game with three balls and no pockets. Called “carom” style, this is a very difficult game where the point is to knock your own cue ball off both the opponent’s ball and an “object” ball in a single shot. It’s all about the way you hit the ball. Some young local Vietnamese dudes showed us how to play, then demanded we join them for drinks on the corner before our train departed. A wild gang of 20-something locals soon gathered and ordered huge rounds of beer as we played music in the street, smoked terrible cigarettes and communicated with one another in that tender way travelers do until we had a mere five minutes to catch our train.

Two of the locals tossed us on the back of their motorscooters and punched it across town, weaving in and out of traffic and laughing the whole way. We arrived to our train just in time to board it as it started pulling away from the station, where we collapsed into our berth (after entering the wrong berth with apologies) and passed out to that rocking glory of a train in a foreign country.

I could easily write a book about this amazing place. I encourage anyone to check it out if you love amazing food, gracious people and some of the coolest scenery I’ve ever laid eyes on.

As far as my final thoughts on Vietnam cuisine: you’ll never find better dishes than you’ll find in Vietnam.