When Mary Sue Mayer and her husband arrived at their polling place Tuesday morning, they were met with a paving project blocking the parking lot they intended to enter. 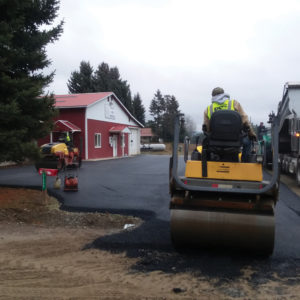 A paving crewmember works on the lot of the Sagle Fire Station on Tuesday morning. Courtesy photo.

“People pulled in and thought they were in the wrong place,” Mayer said Tuesday. “It’s terrible because we need everyone to vote today.”

Jennifer Wood, also a Sagle voter, was concerned that people were leaving the polling place without voting because of the paving.

“Many had to turn away and leave not knowing where to go or what to do,” Wood said.

Selkirk Fire obtained an encroachment permit about a month ago from Bonner County Road and Bridge in order to pave their lot, said Road and Bridge spokesperson Lisa Saldana. Saldana said the permit made no specification as to when the paving should be done.

Selkirk Fire Assistant Chief Dale Hopkins said he made contact with fire personnel at the Sagle station and as soon as he heard about the paving and was told traffic was running smoothly once the confusion was addressed. He said the paving was scheduled for about two weeks ago but was postponed due to weather, and that he hadn’t been informed when the company, Poe Asphalt, would be paving following the postponement.

Brian Poe, Post Falls Division Manager for Poe Asphalt, confirmed that the project was delayed due to rain, and Tuesday “was the only time” the project could be completed.

It is unclear whether Poe Asphalt was aware of the fire station’s use as a polling place prior to showing up to pave Tuesday, as Poe did not respond to follow-up requests before press time.

Bonner County Elections official Charlie Wurm said he headed to the fire station as soon as he heard about the paving.

“We were caught off guard with this, but were assured that the voters could park in the back or on Gun Club Road and access voting,” Wurm said. “We have 30 polling places, and things like this happen with every election cycle.”

Wurm said he knows there were some voters who “blew the panic whistle” as soon as they saw the paving crew, but hopes that with some clarification those voters were able to access their polling place.

“We do our best to get every voter to vote, and I really hope this situation did not stop anybody,” he said.