With nearly two decades of stand-up shows, movie and TV performances and talk show guest spots across every major television network, Ty Barnett has a long and successful comedy career under his belt. This weekend he hits Sandpoint for a night of comedy with support from comics JR Berard and Morgan Preston. Bound to be one of Sandpoint’s biggest comedy nights in years, the show begins 8 p.m. with doors opening 7 p.m. Saturday, Dec. 8, at the 219. Drop by 219 Lounge or call 208-263-5673 for $20 advance tickets, or get access for $23 at the door. 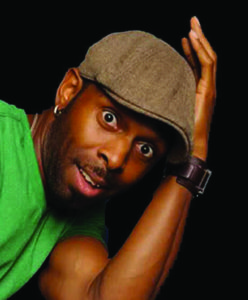 One thing is clear: Based on our conversation with him, Barnett’s been in the game for 18 years, and he has the energy and passion for 18 more.

Sandpoint Reader: There must be no shortage of material for comedians these days. What’s inspiring your act?

Ty Barnett: Comedy has always been the last stand for being able to say what you want to say, because it’s on stage and it’s jokes. These last couple years have been a little different for me personally, politically and comedically. … So I talk about a number of things: about being older, about being a dad, about being a man in today’s society. I grew up watching people like Pryor and Carlin, who were able to say anything they wanted to say for the most part. Now we’re in a society where people are very cautious about words, about innuendo. So it’s a little different. …. But the tour I’m on now, “Grown Man, Baby Steps,” talks about my evolution as a young dude to being an older dude who went from wanting to party all the time to being in bed by 9:30 if I wasn’t performing. … The great thing that’s come out of this is I appreciate my time on stage even more. … What’s been great is I have this maturity about what my voice is. People always say it takes five years to find your voice in stand-up. For me, at this point, I know my voice, I know the subject matter that means more to me. So my shows now are a little bit of “grumpy old dude” mixed with “childish enthusiasm” mixed with “social awareness.”

SR: Maturity must also come in handy with, like you said, this different social climate, where people are more likely to be offended by something.

TB: You know what it comes down to a lot of times is one word. … Eddie Murphy has this joke where he says, “One word can change your perspective on something. One word! Could you imagine if Dr. Martin Luther King said, ‘I have a hunch’?” And I was falling down laughing because it’s such a simple joke, but it’s such a funny thought. And apply that today, talking about Trump. There’s a certain joke I would do about him, and I noticed that when I changed one word, it helped get the material out. Early on I would say, “This dude, I can’t believe this dude,” you know, but I changed it one night when I was doing a show for people in walkers, and I knew I couldn’t go in like that. So instead I said, “I used to go in thinking I hated this guy, but that’s not the case. I’m jealous of this dude.” And that one word changed people’s perspective on whatever I said after that. People were curious now, and that allowed me to go in and do those jokes.

SR: You’ve been a comedian for 18 years now, and I imagine you’ve seen your material evolve like that quite a bit.

TB: My performances are based more so in reality now. I would say about 85 percent of what I say on stage is real to what’s going on. … Another thing I love is being in front of a new audience, where I’m going to give people a chance to see things from my perspective and leave them with a new insight. Plus, I give a message at every show about unity, and being generous with each other and empathy. That’s my main thing now. The only way the world is going to get better is by empathizing with each other and understanding that everyone has a right to have a good life. Just because you’re different doesn’t mean you’re bad.