Veterans offer glimpse into past with students

Seven local veterans; Ed Karasek, Tom Clark, George Garvey, Harold Hew and former LPO history teacher Tom Bass (as well as two other veterans who joined last minute), volunteered to be part of a panel tasked with fielding questions from curious students — many of whom are considering military service after graduation.

If interest can be measured in sound, or lack thereof, the collective silence each man’s voice commanded — on the cusp of a four-day weekend no less — acted as testament. 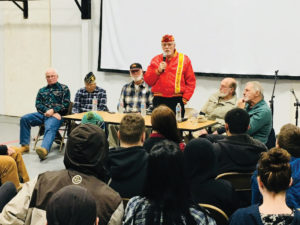 Principal Geoff Penrose began the assembly with a sincere welcome to the “honored guests… for the choice they made to take up arms to defend this country,” something “two million Americans,” he reminded those in attendance, are “out there somewhere, right now, actively doing to protect our ability to meet in this little gym.”

This was followed by the Pledge of Allegiance led by emcee and LPO English teacher Bret Johnson, which segued nicely into Doug Bond’s ethereal rendition of “The Star-Spangled Banner.” Finally, it was time for the men of honor to share their stories.

The veterans sat comfortably around a table, folding chairs supporting bodies that, as Tom Clark anecdotally revealed, the other veterans chuckling in agreement, had once been made to “duck-walk with footlockers weighing some 60 or 70 pounds held above their heads.” But these weren’t just stories about boot camp. From the get-go, there was a no-nonsense, brass-tacks candor from each man. Questions written by students acted as mere suggestions, the men choosing to share what they felt relevant, and microphones, a veritable necessity during most such events, were reduced to table decor, each veteran electing to forego amplification devices in favor of greater intimacy. It worked.

If words can be bound and carried, shared, even experienced, so can personal histories. Ed Karasek, his body visibly shaking with laughter at the emcee’s suggestion veterans can be long-winded, didn’t disappoint. His firsthand account of a tour in Vietnam, albeit censored to PG-13, painted a picture, not just of combat, but of human adaptability, of the horrific becoming, in an effort to survive the conditions of war, commonplace. Students, many of whom struggle to sit still for more than a couple minutes, listened rapt with attention. See Ben Olson’s “Vietnam Veterans of Sandpoint” series in the Reader for the nitty-gritty details.

Not only were the stories compelling, they were honest—something adolescents can sniff out with hound-dog precision. While not all veterans agreed on the recent trend to nonviolently protest the National Anthem — Mr. Karasek outspokenly defended each person’s right to kneel, even calling it “courageous” — they did agree that their experiences in the military, good or bad, made them the men they are today.

To capstone the event, Behavioral Specialist Sarah Wood, along with students Mercedes Johnson and Laura Abromeit, led everyone in singing “America the Beautiful,” which, in its heartfelt solemnity, made our divided country feel, at least for a moment, a little less so.