The future is looking bright for Rick and Randy Evans of the popular Evans Brothers Coffee Roasters in Sandpoint. The pair have announced they are opening a new Evans Brothers coffee shop in Coeur d’Alene on Friday, Nov. 17. 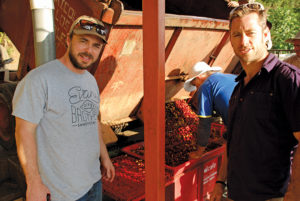 In 2009, brothers Rick and Randy Evans started a coffee roasting business in Sandpoint. In the beginning, it was just the two of them selling small batches of specialty roasted beans.

Previously, Randy was roasting beans near Seattle and Rick was selling real estate in Southern California, but they wanted to reunite and work together. The brothers grew up feeling as if they had no real home as they were “Air Force brats.” When deciding where to live, the brothers planted themselves in Sandpoint because they love everything outdoors and wanted to grow strong roots.

According to Randy, Evans Brothers has seen steady, organic growth. Neither of the brothers wants the business to grow to where quality of the product is compromised, or to the point where they can no longer be directly involved.

Today their shop is a thriving community with lively reunions, interesting conversations and heavenly aromas greeting those walking in through the front door. They roast and sell around 2,000 pounds of quality coffee beans every week.

Talking with the brothers, it’s obvious that they have a deep, abiding love for coffee.

“Coffee is exciting to me because it is the exchange of a lot of different people bringing their passions together to create a beautiful product,” said Randy. “It really starts with the farmer and the passion that they put in, and how that coffee was handled, stored, transported, how we take care of it by roasting it, and then how our baristas prepare the coffee. When all of those things come together the end result can be fantastic. Every step along the way, from seed to cup, is very important to have a good result.”

The brothers have a direct relationship with the Menendez family in El Salvador. Each January they visit the seven small farms that this family owns and cares for. The Menendez family are virtually autonomous, unlike many cooperative farmers. They own their own mill and, by extension, their own their coffee, all the way to export. For the Menendez family, fair trade—which helps farmers receive fair market value for their product—is just not enough. They sell directly to the Evans brothers.

Those beans contribute to unique blends that have achieved widespread popularity throughout the region. There are specialty blends for Schweitzer, which purchases around 200 pounds of coffee a week in the winter. Kootenai Medical Center purchases 150 pounds per week, year round, for their four coffee kiosks). The brothers also sell to nearly a hundred business, ranging from doctor’s offices to grocery stores. And their coffee is sold from Spokane to Boise.

Randy is the primary roaster, a job requiring an attention to detail that Rick says he lacks. Skill and patience is vital because every step is crucial, and carefully selected beans need care. But Randy says Rick is “the engine” driving their company. They hire their employees based on “attitude and passion,” according to Randy.

These days, Evans Brothers depends on its employees to keep the business humming. The brothers recently hired four new people to bring their employee total to 15. The new hires are from Coeur d’Alene and are being trained to open up the new Evans Brothers coffee shop, a 1,500-square-foot space in downtown Coeur d’ Alene on Fifth and Sherman. This location will open Nov. 17 and host a grand opening celebration Dec. 1.

The first employee came along in 2011 when they brought on Jeff Dunwoody to help serve customers. Since then, the team has grown. One longtime employee, Ashley Cugno, has worked at Evans Brothers for two and a half years and loves it. Cugno has been apprenticing on the 15-kilo roaster, which she says is “like taking dad’s nice car out for a spin.”

For Cugno, her coworkers are like a second family, a constant support in getting through life’s ups and downs. Just like a great cup of coffee, her team is a little slice of home.

“We really are family here,” she says.