Understory Coffee and Tea — downtown Sandpoint’s often sunflower-clad coffee stand at the intersection of Second Avenue and Cedar — is opening a second location in Ponderay and kicking things off with a grand opening on Tuesday, Nov. 20.

Understory owners Evan Metz and Johnelle Fifer said the new location came into view this past summer, when owners of the medical village at 30544 Highway 200 reached out to them about bringing their business to the area.

“We weren’t necessarily planning on it,” Metz said. “An opportunity presented itself.” 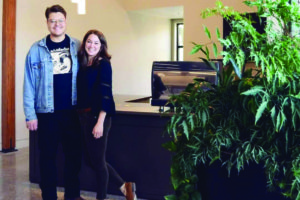 Fifer said after running some numbers it seemed like a feasible option.

“It’s exciting when people reach out to you and like your product,” Fifer said.

While the new location is dominated by medical offices, Fifer said they’ll get creative to make the cafe a comfortable place where people want to spend time. She said there will be a selection of books and board games available, as well as indoor and outdoor seating. They’re also expanding their crew, having already hired two new employees and planning to take on more once summer rolls around.

Metz and Fifer agree that it will be fun adding the sit-down cafe option to their repertoire.

“It’s going to be a cool arena for us to show off our latte art skills, and maybe have parties every now and then,” Fifer said.

The Ponderay cafe also offers enough space to include a small retail section, Fifer said. The section will feature some of Understory’s goods — bagged coffee and hand-blended teas, coffee scrub, chai concentrate and more — as well as goods from other local people.

Tuesday’s grand opening in Ponderay will feature buy-one-get-one-half-off drinks 7 a.m. to 4 p.m. The event marks exactly two years since the opening of their first location, so visitors at the downtown stand on Tuesday will receive a “thank-you-for-the-last-two-years” goody bag, Fifer said.

Metz and Fifer agreed that this expansion is likely the first of many ventures beyond their downtown coffee stand.

Understory’s second cafe is located at 30544 Highway 200, suite 303. Find more details about the new location and grand opening event by visiting Understory on Facebook or @understorycoffee on Instagram. Also learn more about Understory at understorycoffee.com.