This week saw Pine Street’s transition to two-way on Tuesday, the second street to receive the treatment following Fifth Avenue’s transition last Thursday. Early next week, First Avenue and Cedar Street make the switch to two-way traffic as well, building on the re-striping and signage work that contractors wrapped up this week. 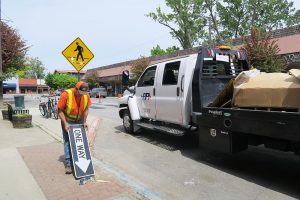 A road crew member takes down the one-way signs in downtown Sandpoint. Photo by Ben Olson.

“Once striping finishes and new signage has been installed to guide traffic, the project will be complete,” said Reed Hollinshead, spokesperson for Idaho Transportation Department.

After the transition is complete on Cedar and First, Church Street will make the switch to two-way traffic east and west between First and Fifth avenues, with through traffic diverted one to two blocks at a time. Work will then center on Fifth and Pine, with Pine set up for one-way traffic between Fifth and Fourth.

According to both ITD and Sandpoint officials, the first steps into two-way traffic have proceeded without major problems. No one reported any crashes or fender benders, and according to Sandpoint City Administrator Jennifer Stapleton, residents have largely adjusted to the first changes through slow, careful driving. City staff have been working with ITD to make the transition for drivers as painless as possible. 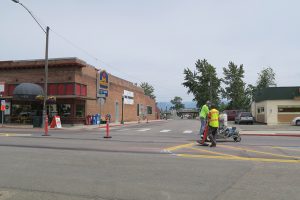 “Obviously there’s an adjustment period that goes along with this, but we’ve had a pretty heavy police presence downtown as you know,” said Stapleton.

Sandpoint Public Works Director Ryan Luttmann is pleased with how work has progressed. Like other Sandpoint residents, he has learned to work around the downtown transition zones.

Luttmann’s department is in the somewhat awkward situation of assisting on the two-way transition while major work is under way on the Schweitzer Cutoff Road bridge. The detour flowing traffic away from Schweitzer Cutoff Road has led to some traffic backups at the Boyer roundabout. According to Luttmann, ITD officials have assisted with that problem by adjusting the green light cycles at the intersection of Fifth and Larch. 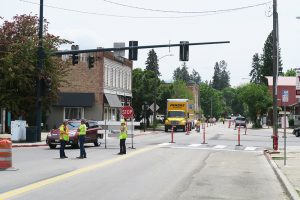 In the meantime, city and ITD officials urge drivers to remain attentive and work with road crews and police as roadwork continues.

“Drivers are urged to be patient and cautious as motorists get used to the new configuration,” said Hollinshead.

Stapleton also reminds residents that the city will be looking for any kinks to iron out as Sandpoint adjusts to downtown two-way traffic, whether that be additional signage or altered road markings.

“I think we’ll just continue to monitor it, and we do expect that there will be some modifications we’ll need,” she said.