It may be William Shakespeare who created an enduring classic in “Twelfth Night,” but it’s local actors and producers who interpreted it like you’ve never seen before. 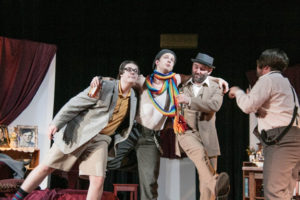 Local production company Unknown Locals is back with a production of the Shakespeare comedy directed by Jeremiah and Skye Campbell. While fans of the play will recognize the classic story of mistaken identity, court scheming and romantic confusion, the creative team’s 1940s aesthetic choice and introduction of frequent musical interludes bring new vitality to Shakespeare’s work.

The play is a masterwork of comic farce in which its characters, usually ignorant of vital information, blithely stumble into absurd situations. When Viola is separated from her twin brother, Sebastian, in a shipwreck, she disguises herself as a man and enters the service of Duke Orsino. She finds herself enlisted in Orsino’s bid to win the heart of Olivia, a wealthy countess in mourning for her brother and father. Her mission takes an unexpected twist when Olivia, thinking Viola is a man, falls in love with her even as Viola’s feelings for Duke Orsino deepen.

Complicating matters are scheming noblemen and servants conspiring to make obnoxious steward Malvolio believe Olivia is in love with him. What’s more, Sebastian is at large and creating yet more confusion with his physical similarity to Viola.

While the play is full of witty lines that are memorable in their own right, the actors earned big laughs based on their delivery alone. It’s no easy task to suppress laughter at Malvolio’s blustery self-aggrandizing, Olivia’s love-sick soliloquies or the drunken scheming of noblemen and servants.

Particularly striking is the music, which was written for the play by Skye Campbell and Samuel Richardson. Songs are woven naturally into the narrative, sometimes performed alone by Richardson’s character, Feste, and other times by many characters in elaborate set pieces. The music adds a unique spin to a classic play that everyone must experiences for themselves.

“Twelfth Night” debuted last week at the Heartwood Center, concluding with a standing ovation from the audience Friday night. This weekend is your last chance to catch this lovingly-crafted local production. Doors open at 6:30 p.m. and the show begins 7 p.m. at the Heartwood Center  on Friday, April 13, and Saturday, April 14. Tickets are available at Eve’s Leaves, La Chic Boutique and at the door.