Time’s up for Five Minutes of Fame

Sandpoint has seen a lot of change in the last two decades, so it’s easy to forget the characteristics of town that have stayed remarkably the same. One such constant is the monthly open mic Five Minutes of Fame.

Five Minutes celebrated its 20th birthday last August, but the event won’t be making it to 21. 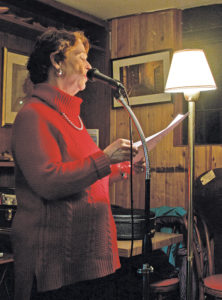 “The enthusiasm is still there, but it had a lifespan like anything else,” said Five Minutes organizer Tom Kramer.

Kramer said the open mic has evolved over the years — from being named “Expresso Yourself,” to being held at various venues in town while trying to find a good fit. For the last 13 years, Cafe Bodega at Foster’s Crossing has hosted the open mic.

Kramer said no matter the evolution, Five Minutes has kept the community feel it started with in the late ‘90s thanks to founder Karen Seashore. He said the continued support from the community helped the event to become the longest-running open mic in Sandpoint.

“It really is a family,” he said, noting that Five Minutes’ regulars are aging and are therefore unable to attend consistently, partially prompting the event’s end. “It’s cramped our style, but we still want to go out with a bang.”

Attend Five Minutes of Fame’s wrap-up evening Wednesday, April 18, at Cafe Bodega at 6:30 p.m. There will be a dessert potluck as well as the traditional open mic format. Bring instruments, read a poem or simply come listen.

Kramer and his wife Robens Napolitan said they are especially grateful to Dave and Kate Luers of Foster’s Crossing for providing a venue for so long.