Camus’ ‘The Plague’ should be required reading right now

In 1947, at the age of 34, Albert Camus penned a novel called The Plague, which chronicles a fictional bubonic plague outbreak to the Algerian coastal town of Oran. This book should be required reading right now, as we deal with the ramifications of the coronavirus pandemic in modern-day America.

It’s important to note that COVID-19 is nowhere near as destructive as Camus’ plague. In the 14th century, the “Black Death” killed about one-third of the people in Europe. Three hundred years later, it rampaged through London killing nearly a quarter of its population. When treated with antibiotics, the plague had a death rate of 10%, and untreated up to 90%, many times higher than coronavirus mortality rates. 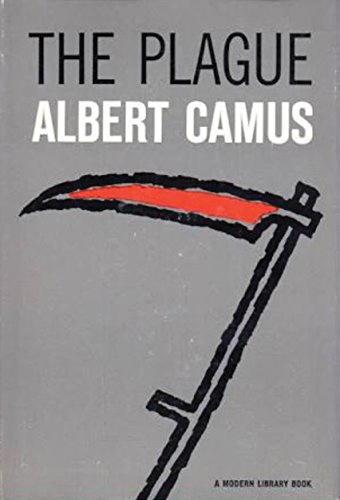 That being said, the true value of Camus’ The Plague is in his examination of the connection between a physical and psychological infection when an outbreak affects a society.

The book starts with a sudden onset of rats dying on sidewalks and street corners in increasing numbers. The main character, a doctor named Rieux, is one of the first people in Oran to notice this strange phenomenon. His friend Michel expresses outrage, believing the rats have been planted by young “scallywags” as a prank. Michel’s response serves as foreshadowing to the way many in the U.S. reacted to the coronavirus outbreak. Michel misinterpreting signs of a pandemic as an annoyance, possibly due to shoddy work by the sanitation department, is analogous to networks like Fox News, which in the early stages of the coronavirus outbreak likened it to a “hoax” or an engineered plan by Democrats to damage the economy and, as as result, hurt President Donald Trump’s reelection chances.

When Michel falls ill and dies, Rieux recognizes the symptoms of the plague but hesitates, stating that, “The public mustn’t be alarmed, that wouldn’t do at all.” The town leaders agree, believing the plague is nothing more than “a special type of fever.”

It is only when the deaths dramatically increase in pace that Rieux rejects the attempts to downplay the disease and town leaders are forced to take action.

The gates of the city are closed and quarantines imposed, cutting off Oran’s inhabitants from one another, as well as the outside world. Rieux embarks on a mission to treat the town’s residents, in the process shedding valuable light on the collective mentality of a city under quarantine.

Camus brilliantly weaves stories from a range of interesting characters to capture the emotional fallout of the plague, including the feelings of isolation and fear many of us have felt amid our own pandemic.

After the plague lingers for the better part of a year, it departs just as suddenly as it appeared, “slinking back to the obscure lair from which it had stealthily emerged.” Camus reminds us, in wrapping up his novel, the importance of correctly recognizing “bewildering portents,” stating that while this disruption will not last forever, others will emerge one day.

Fast forward to today, the parallels between The Plague and our own coronavirus outbreak are astounding — with one notable exception: Oran’s inhabitants had no virtual community in which to connect with one another. Camus paints a vivid picture of how many inhabitants fought their desperate isolation by dressing up for no reason, brazenly strolling along the empty streets, eating at restaurants while poised to flee if another diner should fall ill. He shows “the frantic desire for life that thrives in the heart of every great calamity” by reinforcing the strength (and comfort) of community in a time of crisis.

When we examine our own community’s reaction in the wake of this global pandemic, I am left wondering how history will remember those who sought to violate social distancing guidelines out of fear, hubris or pure ignorance. The crowd that recently gathered on the Long Bridge to protest Gov. Brad Little’s stay-at-home order could easily have been written into existence by Camus himself, showing that not all in the community viewed the overall health of its citizens as important enough a reason to follow the rules.

Most important, it’s remarkable how a fictional novel written nearly 70 years ago can accurately predict the way another group of people will react when a “plague” reaches their shore. If and when another outbreak like coronavirus happens in the future, let’s hope we can learn from this experience instead of starting all over at zero again.